Feast of the Epiphany 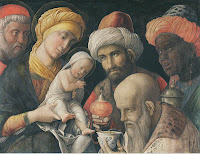 Mantegna's Adoration of the Magi is explored here. It's in the Getty collection. From the Bible Archaeology Review comes a helpful article by Robin Jensen, "Witnessing the Divine: the Magi in Art and Literature." She makes several useful points:
If Origen is correct that the Magi were the first to recognize Jesus as Messiah, isn't it salutary to remember on the Feast of the Epiphany that those recognized as outsiders have insights into and claims upon Jesus that predate ours?
at January 06, 2010