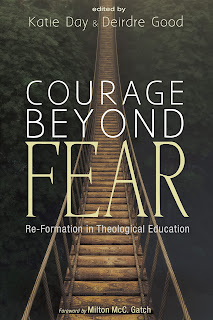 Prof James McGrath of Butler University was kind enough to invite Prof Katie Day and myself to join him in a recent podcast on our co-edited book, Courage Beyond Fear: Re-Formation in Theological Education (2019: Pickwick Publications: Wipf and Stock, Oregon). I enjoyed our three-way conversation immensely, particularly since we ventured into the role of religion and faith in public discourse; directions of theological education; crises, vulnerability, and community; models of leadership; governance and mission.

Courage Beyond Fear is a collection of sermons and addresses from theologians and ministers who taught and studied at seminaries that underwent wrenching change, often when corporate-style governance was vaunted over theological education, spiritual insight, and community. This book, edited by Katie Day and Deirdre Good, is the first to record stories of seminary and theological school crises from an inside perspective of students and faculty living through those changes. “Drawing on scripture, history and faith, these uncompromising voices set out questions of forgiveness, vision, and faithfulness which are essential reading for anyone dealing with institutional or personal loss,” Rebecca Lyman, Professor Emerita of History, Church Divinity School of the Pacific, wrote in her review on Amazon.
at May 31, 2019 No comments:

"The Jews" in John's Gospel: Resources B

Anti-Judaism and the Fourth Gospel originated from a research program at the Katholieke Universiteit Leuven (Belgium) to study the alleged anti-Judaism of the Gospel of John. At the research seminar in Leuven on Jan 17-18, 2000, 24 leading scholars in the fields of Johannine exegesis and Jewish-Christian dialogue met and some of the contributors rewrote their essays for the present volume. The complete set of essays from the seminar has already been published. This volume is the definitive collection on a central problem in the New Testament.

In the first essay "Wrestling with Johannine Anti-Judaism: A Hermeneutical Framework for the Analysis of the Current Debate" the editors structure the debate in the volume on five questions:

A) Is the Gospel of John anti-Jewish?
B)Who are "the Jews" in John?
C) How do we have to understand the presumed conflict between the Johannine community and "the Jews"?
D) Is John supersessionist?
E) What is the possible contribution of hermeneutics to reading John?

In regard to A), no one denies that anti-Judaism has found its way into the interpretation of John but did it originate at the level of the interpreter, the level of the text, or the level of the author? Those agreeing that John depicts the relationship between Jesus and "the Jews" in a negative way (B) sometimes limit, relativize, and even deny the anti-Judaism implied in it. Important here is how to understand John's frequent negative use of the term "the Jews." Jewish authorities? First-century Jews? Only those who do not believe in Jesus? All Jews of faith convictions? As part of an inner-Jewish conflict? C) John 9:22 is now understood as referring only to a local conflict between the Johannine community and their Jewish neighbors rather than as evidence of the full separation of Judaism and Christianity into separate religions. No longer is the entire Jewish religion seen as excommunicating all of Christianity by a formal decree and thus Judaism cannot be blamed for the rupture between Judaism and Christianity. Thus, explanations excusing John's comments on Jews and Judaism as a response to Jewish exclusion and hence safeguarding the gospel's status as an authoritative text are inadequate.

In summary: - anti-Judaism in the fourth gospel reaches to the core of the Christian message and is intrinsically oppressive rather than revelatory. They are not later redactions of the words of Jesus unacceptable from a Christian point of view. Nor can one excise them to save the healthy core of the message. However the hermeneutical solution proposed (E) is that scriptures themselves are not the only place or the end of divine revelation. The author of John was a sinful human being. Yet the gospel cannot be reduced to its anti-Jewish elements. It projects an alternative world of all-inclusive love and life that transcends its anti-Judaism and this world of the text rather than the world of the author is a witness to divine revelation.

"The Jews" in John's Gospel: Resources A

Essential reading on this topic is an article by Prof Adele Reinhartz, "Reflections on my journey with John, A Retrospective from Adele Reinhartz," in Ancient Jew Review, April 11, 2018. In she argues that

"John’s well-documented anti-Judaism is not peripheral but central to the Gospel’s theology and rhetorical program.  While I do not for a moment believe that John’s author(s) would have foreseen or applauded the history of Christian anti-Judaism, there is no doubt that they intended to foster suspicion of, distancing from, and even hatred of the ioudaioi. To be sure, John’s ioudaioi are not an ethnic or religious category but a rhetorical one."

"Jesus and the first disciples were ethnically ioudaioi, but not theologically so – this label is never used for the disciples and only once for Jesus (John 4:9).  Yet the fact that there existed, and continued to exist, real people who fit that label – whether we call them Jews or Judeans or by some other name – and who, by and large, did not go along with the Gospel’s views about God, Jesus, and humankind, means that John’s Gospel could be, and was, used to build a wall between Christ-confessors and ioudaioi that had real consequences for real Jews."

Her new book on this topic will be published this July:

Cast Out of the Covenant
Jews and Anti-Judaism in the Gospel of John
ADELE REINHARTZ
The Gospel of John presents its readers, listeners, and interpreters with a serious problem: how can we reconcile the Gospel’s exalted spirituality and deep knowledge of Judaism with its portrayal of the Jews as the children of the devil (John 8:44) who persecuted Christ and his followers?

One widespread solution to this problem is the so-called “expulsion hypothesis.” According to this view, the Fourth Gospel was addressed to a Jewish group of believers in Christ that had been expelled from the synagogue due to their faith. The anti-Jewish elements express their natural resentment of how they had been treated; the Jewish elements of the Gospel, on the other hand, reflect the Jewishness of this group and also soften the force of the Gospel’s anti-Jewish comments.

In Cast out of the Covenant, Adele Reinhartz presents a detailed critique of the expulsion hypothesis on literary and historical grounds. She argues that, far from softening the Gospel’s anti-Jewishness, the Gospel’s Jewish elements in fact contribute to it. Focusing on the Gospel’s persuasive language and intentions, Reinhartz shows that the Gospel’s anti-Jewishness is evident not only in the Gospel’s hostile comments about the Jews but also in its appropriation of Torah, Temple, and Covenant that were so central to first-century Jewish identity. Through its skillful use of rhetoric, the Gospel attempts to convince its audience that God’s favor had turned away from the Jews to the Gentiles; that there is a deep rift between the synagogue and those who confess Christ as Messiah; and that, in the Gospel’s view, this rift was initiated in Jesus’ own lifetime. The Fourth Gospel, Reinhartz argues, appropriates Jewishness at the same time as it repudiates Jews. In doing so, it also promotes a “parting of the ways” between those who believe that Jesus is the messiah, the Son of God, and those who do not, that is, the Jews. This rhetorical program, she suggests, may have been used to promote outreach or even an organized mission to the Gentiles, following in the footsteps of Paul and his mid-first-century contemporaries.

Prof Joel Marcus has some very useful things to say about John's use of "the Jews" in the Gospel of John in his farewell lecture "Thoughts on the Parting of the Ways Between Judaism and Christianity" given this Spring 2019 at Duke University.

These thoughts are also related to a collection of essays: The Ways That Often Parted: Essays in Honor of Joel Marcus, Eds. Lori Baron, Jill Hicks-Keeton, and Matthew Theissen (SBL Press 2018) offering not "one coherent narrative," but "snapshots of how Jews and Christians (variously defined)" interacted, conflicted and collaborated in first and second century literature. The argument of these essays is that "Christianity's eventual distinction from Judaism was messy and multiform," occurring in different places at different times, in different ways and with different resources, histories, theologies and politics.