The Right Reverend Sam B. Hulsey Chair in Episcopal Studies
Brite Divinity School, affiliated with Texas Christian University, invites applications for appointment to The Rt. Rev. Sam B. Hulsey Chair in Episcopal Studies. The field is open. Applicants in Pastoral Care and Pastoral Theology or in Theology are especially encouraged to apply. The appointment will be at the Assistant Professor level. The Ph.D. or equivalent is required. Demonstrated competence in teaching and scholarly research is expected. Teaching load is four courses per year at Masters and Doctoral levels.

Brite Divinity School is an ecumenical seminary related to the Christian Church (Disciples of Christ). It has an active Episcopal Studies Program with its own director. Brite is an EEO employer and maintains a policy of nondiscrimination with respect to all employees and applicants for employment. Upload letter of application describing interests in teaching and research and dossier to https://tcu.igreentree.com/CSS_Faculty/CSSPage_Welcome.asp. Send three letters of recommendation to Dean Nancy Ramsay, Brite Divinity School, TCU Box 298130, Fort Worth, TX 76129. Review of applicants will begin January 9 and continue until the position is filled. The position begins Fall, 2012.
at November 21, 2011 No comments: 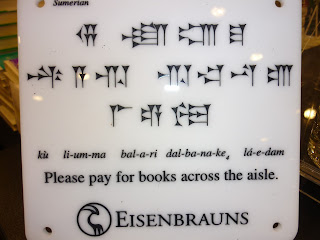 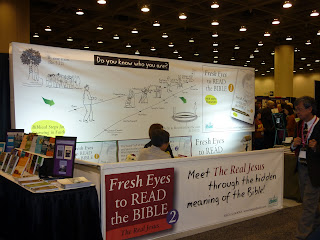 At the large book exhibit for the combined American Academy of Religion and the Society of Biblical Literature, there are some wonderful signs like this one. It's a chance to catch up on what has recently been published and what is about to appear. People are offered discounts not only for the duration of the convention but also until the end of December. I'm actually collecting such order forms for someone who couldn't be here so that option is a valuable one.

Editors are keen to converse about publishing possibilities with scholars. Authors can often be seen in the vicinity of presses that have published their work and the presses in turn will promote new publications with posters of titles and announcements of review sessions at the conference. I like to ask a press which of their books has sold well and what their new books are. Today I also asked a number of presses what Coptic texts they had published just to see what the level of interest for Coptic materials is.  The answer is, not much. Does a portable Coptic New Testament exist?

Sometimes, you get a booth that doesn't draw much interest. But it should be said (inspite of the above pic) that the SBL encourages confessional diversity about which there has been some controversy here. More recently, in the Chronicle, Jacques Berlinerblau reports on a session he attended in SF run by the Society for Pentecostal Studies.

If it is taken as a given that God exists, that the Bible is His word and His Truth, and that one’s job is to cooperatively identify that Truth, then what happens to the scholarly ideal of critical inquiry? To what degree does a professor in a Pentecostal seminary have the right to challenge these articles of faith? And what happens to her when she does that?

How do Berlinerblau or Hendel or anyone else who is not a member of this faith community fit into any of this? Is participation in an SPS session open to all members of the SBL?

It would be wrong to ask these questions solely of Pentecostals. What many of us in the SBL have been alleging for years is that the prevalence of organized religious blocs in the Society creates a state of affairs that is unhealthy for scholarship on the Bible and Bible scholars.


Update: my favorite moment at SBL was a social one. Over cocktails with a new friend one evening I heard about his first teaching experience. "Remember when you told us about your first teaching day?" he said. (I'd had a nosebleed out of sheer terror and retreated to the bathroom to staunch the bleeding). "Well, it was similar. I thought I'd throw up. My palms were sweaty...I was very nervous. I knew that the students would be very familiar with the text--more than you or I would ever be--so I got each of them to read the same passage from their bibles. And as each one read a different translation, people began to hear that the Word of God wasn't saying the same thing. So I said, 'How can we reconcile these differences...?' And we had a great discussion. Afterwards, one of them said, 'This was wonderful! I had no idea what to expect and I am already looking forward to the rest of the class...' And I sighed and went home."
at November 19, 2011 No comments:

A Theology of Marriage including Same-Sex Couples

ATR 93 (2011) published the essay "A Theology of Marriage Including Same-Sex Couples: A View from the Liberals" written by myself, Willis Jenkins, Cynthia Kittredge and Eugene F. Rogers, as part of a theological colloquy on "Same-Sex Relationships and the Nature of Marriage." There are a few typos probably from the scanner not the original essay. The traditionalist view is here. There are responses of each group to the other's papers and finally some Anglican and Ecumenical responses. Bishop Parsley writes the foreword and Ellen Charry the preface.
at November 09, 2011 No comments: 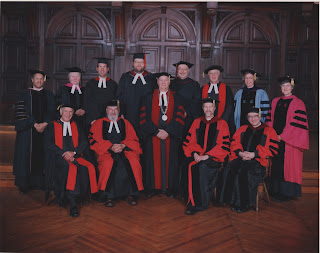 To me, this is an early picture of the faculty at General Theological Seminary.  It was taken before 1997 at a time when Professor Wright was on sabbatical.

In case anyone missed it, here is my post for Episcopal Cafe on "Jesus and Abba" written at the end of October. I put additional material in the comments and note with delight and gratitude that Thinking Anglicans has reposted it here. Such a piece gets far more readers than anything else I might publish!
at November 06, 2011 No comments:

We are off to the White Light Festival of 2011 tonight to hear the Schola Cantorum de Venezuela. This is its second year. The festival began as an exploration of ways music informs and enlightens our spiritual lives. Jane Moss, the festival director, interviewed by HuffPo, likens our 24/7 craving for technology to an addiction which the festival attempts to identify and overcome.

This year's festival, which begins on October 20 and runs to November 19, includes performances of Beethoven's "Missa Solemnis," an Olivier Messiaen organ recital, and the Huelgas Ensemble's performance of a capella choral music from the Renaissance, as well as a number of original contemporary offerings. Many of the performances will take place at Alice Tully Hall, though others are spread across the city. Prices range from free (the opening night performance and a light installation) to around $100.
While last year's lineup was overtly spiritual, this year's programming is more varied in content, though each piece has been selected based on some shared ineffable quality of "White Light"-ness.
"They're works that evoke in a very powerful way, themes or ideas of transcendence," Moss said. "By that I don't necessarily mean spiritual transcendence, but all those pieces of ourselves that are not related to our ego which many people have no time for anymore."
The festival will premiere a production of "Desdemona," a new take on "Othello," created through collaboration between Toni Morrison, director Peter Sellars and Malian musician Rokia Traore. Also making its debut is the silent film "The Passion of the Joan of Arc," presented with a score by Adrian Utley of Portishead and Will Gregory of Goldfrapp.
After each performance, attendees can visit a White Light lounge next to the venue, where they can drink sparkling water or sparkling wine and mingle with their fellow peace-seekers. It's this kind of artistic community that Moss wants to reinstate in contemporary performance.
"Performances are one of the few communal experiences with people remaining," Moss said. "In the course of a performance, you get closer to other people. You feel more connected to the human experience."
at November 03, 2011 No comments:

Is. 26:19 Your dead shall live, their corpses shall rise.
O dwellers in the dust, awake and sing for joy!
For your dew is a radiant dew,
and the earth will give birth to those long dead. 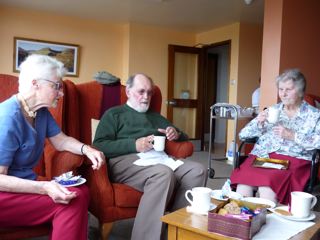 Dorothy Blake with my parents at Our Lady's Manor in Dublin. Dorothy died on January 27th of this year. She gave her whole life to establishing residences for disabled people in which they could live independently. I've been to two of the residences and they are wonderful homes. For Dorothy's life and witness, I give thanks today.
at November 01, 2011 No comments: