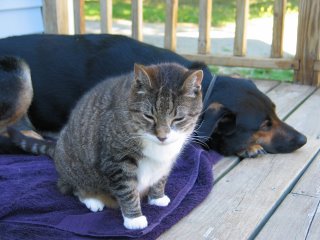 is more often than not rather furry. We live in seminary housing in the middle of Chelsea with our two dogs Diamond and Reuben, and our two cats Fishy and Mouflon. Reuben and Fishy get on well (as you see) but alas, the same cannot be said of Mouflon and Fish. Mouflon seems to think of himself as something other than a cat (a dog perhaps?) and prefers to relate to people.

Living in a household wherein only two occupants communicate by words makes one pay attention to NVC: canine gestures, movements, expressions; feline presence and sounds (Fishy is part siamese) all play a part of daily routine. Laura Hillenbrand describes Tom Smith, Seabiscuit's trainer: "Perhaps Smith spoke so infrequently because he was listening so hard. Horses speak with the smallest of motions; Smith saw and heard everything." When the grooms walked horses round in circles to cool them down, they'd see him "squatting on the floor turning the horses over in his mind." "He lived by a single maxim: Learn your horse. Each one is an individual, and once you penetrate his mind and heart, you can often work wonders with an otherwise intractable beast."

We got Reuben as an eight week old puppy. He was off leash on 10th Avenue following an older dog and a young man. Julian said to the young man, "If you love your dog, you'll keep him on a leash as 10th Avenue is very busy." When the young man announced that he wanted not to keep but to sell him, Julian said, "Done!" Reuben arrived in our house after a quick checkup at the local vet, and the first thing he did was rush to hide behind Angus, our old shepherd, who was lying down. Angus, being rather old and mellow, offered Reuben the puppy a safe warm vantage point from which to take in the lay of our apartment. Negotiating Diamond, our female shepherd (who is rather tempramental due to her unstable upbringing before we got her) and with whom he grew up as a sister/mother substitute, is one of Reuben's skills.
at February 25, 2006 1 comment:

Whatever happened to imagination?

In an effort to revive sagging fortunes and declining attendance at Colonial Williamsburg, organizers at the Colonial Williamsburg Foundation have affianced themselves to an organization called "Revolutionary City" (Virginia Pilot, Feb 21st). Starting in March, parts of the town will be closed to tourists unless they pay extra admission fees. Behind the gates, "Revolutionary City" will recreate events during the American revolution between 1776-1783 in which "George Washington" will address the troops before the march to Yorktown, for example. Fee paying guests may ask a soldier what he thinks of his leader (Newsweek, Feb 13th).

Apparently, museum administrators opine that people today have a harder time connecting their own lives with living history sites like Williamsburg. They feel that recreations of distant events with live actors will help today's multicultural audiences do just that.

The Virginia Pilot article reports that in the mid-eighties 1.2 million paying visitors a year kept local restaurant and hotels busy. When I visited in 1976, it was thriving. I enjoyed every minute of my visit. So what happened to imagination? I don't know about you, but once I see a recreation of an event or a book as a movie, its likely that images from the movie replace what I once imagined as the battle of Culloden and the defeat of Bonnie Prince Charlie, or a tea farm in Kenya where Karen Blixen once lived at the foot of the Ngong hills (about which I know a tiny bit having grown up near Kisumu). Imagination not only liberates our minds and hearts but it creates possibility and vision. It is polyvalent and not uniform: no images need be set in stone.

Recently I revisited the Walters Art Gallery in Baltimore. My acoustiguide allowed me to access three kinds of information: descriptions of art works, assessments of the religious significance of various pieces and short pieces of music thought relevant to the piece. With imagination and emotions kindled, I can still see and hear a painting and accompanying music from that visit. If my critical imagination abandoned painting descriptions or thought another piece of music more suitable to a painting or sculpture, so much the better.

I've been to Gettysburg. The field where Pickett's charge took place and the setting for President Lincoln's Gettysburg address live in my imagination aided by a few photographs of the time. I am alas, sceptical that recreating events from the period of the American revolution will heighten my engagement with the period. I'm glad I went to Williamsburg a long time ago.
at February 22, 2006 2 comments:

Thirty years ago when I was an undergraduate at St. Mary's College, St. Andrews University in Scotland, Professors Ernest Best, Matthew Black and Robin McL. Wilson ran the NT department. My father took me to visit before I was accepted and anxiously inquired of Principal Black whether it was likely that I might marry a presbyterian. "Oh, there are many different groups represented here" was the reply.

Prof. Wilson once told us at St. Mary's a wonderful story about material being prepared for a two volume work on NT Apocrypha and Pseudepigrapha he translated into English. Some of the material was given to a typist who happened to be a friend of Prof. Nisbet's daughter. Prof. Nisbet recounted that his daughter came to him wondering (on behalf of her friend) about Prof. Wilson's interest in ghosties. "Oh, its not ghosties Prof. Wilson is interested in," he replied, "Its Gnostics." 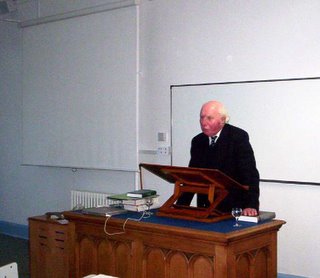 Yesterday was given over to a celebration of Prof. Wilson's 90th birthday as reported by Jim Davila in Paleojudaica (from whom I have appropriated this picture). It was through Prof. Wilson that I became interested in Gnosticism and it was thanks to him that I ended up studying with George Macrae at Harvard.

We last met in 2000 at the SNTS meeting in Durham (see below). Perhaps my favorite memory of him was from an academic meeting in Rome in 1974. He kindly took me under his wing as it was my first visit to "the eternal city." One afternoon, his hearing aid failed as we set out on a guided tour of the catacombs. He simply turned it off and enjoyed the tour with the rest of the group. 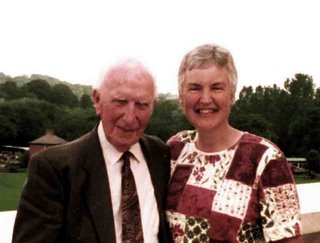 Here's a letter written by the Dean of Emmanuel College Cambridge, the Rev. Jeremy Caddick about the college's position on blessing civil partnerships. Its been written about in the Guardian.

The Chapel Committee here recently met and considered, among other things, what should be the response to requests for services following the registering of Civil Partnerships. The Committee looked at the House of Bishops’ Pastoral Statement issued last July.

I am conscious that the Colleges do not see themselves as falling within the formal jurisdiction of the Diocese of Ely, but I thought it important to write to you as the nearest member of the House of Bishops to tell you about the outcome of those discussions, and also to put on record my own dismay at the damage that is being done to the Church’s standing by the handling of this question. I am aware that your ear will also be being bent by those who take a very different view from my own!

The advice of members of the Chapel Committee and of the College Council, who also considered the matter, was that we would not wish to close the door to having services for members of the College community who requested them. They left it to the Dean to judge what form of service would be appropriate. (I recognise that there will be complex issues to be talked through in relation to each request that is received. None have been so far.)

The House of Bishops statement came in for considerable criticism. In particular people were not convinced by the distinction between not offering a blessing on one hand and encouraging clergy to respond sensitively to requests for services of prayer on the other.

In a community such as this one people know that there is considerable diversity in human sexual relationships, and, in general, see the importance of affirming and celebrating those that are faithful and life affirming. People look to college chapels as offering resources and support in doing that, and this is part of the ministry here that I continue to find rewarding and encouraging.

I appreciate the political considerations that propel the House of Bishops to begin the statement with quite such a vehement reaffirmation of the teaching that, “sexual intercourse, as an expression of faithful intimacy, properly belongs within marriage exclusively” (emphasis added). However such a starting point would seem to fly in the face of pastoral experience. To put it bluntly, what planet is the House of Bishops on? I cannot recall the last time I presided over the marriage of a couple who were not already sleeping together. I have no intention of turning such couples away and rather than taxing them on the subject of their sleeping arrangements, I find it much more productive to use this once in a lifetime opportunity to draw their attention to the grace-charged and God revealing aspects of the relationship that they are in the process of making.

I am concerned that in setting its face so publicly against gay relationships the Church imperils, perhaps terminally, its standing to speak authoritatively on the subject of relationships generally. There is no shortage of people who wish to portray the Church as reactionary and irrelevant. To be blunt again, I am dismayed that the House of Bishops statement plays into their hands.
at February 17, 2006 1 comment:

What Are They Saying About Jesus?

A talk I gave for the Church Club of NYC on Jan 30th at Church of the Ascension can be accessed here. The link has links to an mp3 file and a PowerPoint Presentation (alas without graphics --lost in the conversion to Adobe) so with a bit of finessing, you can link the sound file to the PPT. Enjoy!
at February 07, 2006 No comments: