Women and public speaking by Mary Beard in LRB

Mary Beard, fellow of Newnham College Cambridge where she teaches Classics has an excellent piece on women and public speech in the LRB:

My aim here – and I acknowledge the irony of my being given the space to address the subject – is to take a long view, a very long view, on the culturally awkward relationship between the voice of women and the public sphere of speech-making, debate and comment: politics in its widest sense, from office committees to the floor of the House. I’m hoping that the long view will help us get beyond the simple diagnosis of ‘misogyny’ that we tend a bit lazily to fall back on. To be sure, ‘misogyny’ is one way of describing of what’s going on. (If you go on a television discussion programme and then receive a load of tweets comparing your genitalia to a variety of unpleasantly rotting vegetables, it’s hard to find a more apt word.) But if we want to understand – and do something about – the fact that women, even when they are not silenced, still have to pay a very high price for being heard, we have to recognise that it is a bit more complicated and that there’s a long back-story.

She says that there are only two exceptions: 1) Women are given speech as victims and martyrs (think of early Christian women, some of whom even "changed gender" at the point of public discourse) and 2) on occasions when women speak out "to defend their homes, children, husbands or interests of other women." Think here of the mother of the Maccabean martyrs.

The issue is larger than this, however,

What I mean is that public speaking and oratory were not merely things that ancient women didn’t do: they were exclusive practices and skills that defined masculinity as a gender... Public speech was a – if not the– defining attribute of male-ness. A woman speaking in public was, in most circumstances, by definition not a woman. We find repeated stress throughout ancient literature on the authority of the deep male voice. As one ancient scientific treatise explicitly put it, a low-pitched voice indicated manly courage, a high-pitched voice female cowardice. Or as other classical writers insisted, the tone and timbre of women’s speech always threatened to subvert not just the voice of the male orator, but also the social and political stability, the health, of the whole state. So another second-century lecturer and guru, Dio Chrysostom, whose name, significantly, means Dio ‘the Golden Mouth’, asked his audience to imagine a situation where ‘an entire community was struck by the following strange affliction: all the men suddenly got female voices, and no male – child or adult – could say anything in a manly way. Would not that seem terrible and harder to bear than any plague? I’m sure they would send off to a sanctuary to consult the gods and try to propitiate the divine power with many gifts.’ He wasn’t joking.

and she concludes that we need to
raise bigger questions about the nature and purpose of speech, male or female. We should perhaps take our cue from this, and try to bring to the surface the kinds of question we tend to shelve about how we speak in public, why and whose voice fits. What we need is some old fashioned consciousness-raising about what we mean by the voice of authority and how we’ve come to construct it.
at February 15, 2014 No comments:

How Colm Toibin wrote The Testament of Mary

At 192 Books last week, a group of us went from the seminary to hear Colm Toibin read from several of his books. When one of our number asked him how he came to write The Testament of Mary, he explained that one Friday night whilst everyone was out dancing, he stayed at home and read the Introduction to E.V. Rieu's (1953) translation "The Four Gospels." Of John, the author of the fourth gospel, E.V. Rieu writes in the Introduction (p xxix), "It is not unlikely that he read Euripides and Plato." Deleting the words " not un(likely)," Toibin imagined that if John had indeed read Euripides and Plato, (at our event, he said "Aeschylus") then the world of Greek tragedy including tragic women opened John's gospel to his imagination and he considered how Mary (in John?) might be a figure like Antigone or Medea.

This makes sense of much of the book. Where a Jewish Mary once went to a synagogue, Toibin's Mary, living in Ephesus, at the end of the book goes with other women to the temple of Artemis. Her sensibilities are not those of the gospel writers who pester her to say things about Jesus. (Toibin says that on Mary the gospels were no help.) "They will thrive and prevail and I will die," she says. "If you want witnesses," she says to them, "then I am one and I can tell you now , when you say that he redeemed the world, I will say that it was not worth it. It was not worth it."
at February 09, 2014 No comments:

Today’s gospel is about seeing and holding, hearing and being heard.
To see and to hold and to hear, you have to have an object. In today’s gospel that’s Jesus. Jesus is a baby whose parents present him in the temple. Later in Luke’s gospel an adult Jesus will be the subject not just of Luke but the assumed subject of Luke-Acts.
In today’s gospel
·      Anna and Simeon do the seeing
·      Simeon does the holding
·      And we try to see what they see, hold what they hold and hear what they say
What does it matter? It matters, because in seeing and holding and hearing babies, as Anna and Simeon do, we can create trust in and with those around us, and in these circles of widening trust, we have the chance –through small acts--to make and re-make the world.

But first, we have to practice listening.

There was, said the great conductor Claudio Abbado, a certain sound of snow—
·      Not from underfoot crunching but
·      The sound of falling flakes
·      New down dipping on an ocean of spray
·      Pianissimo, fading into silence

Claudio Abaddo had learned listening skills from his maternal grandfather, an expert in ancient languages. Together on holidays they would walk in silence near the Matterhorn. And as an adult he walked there again, “specifically to test on the silence the orchestral scores that flowed, perfectly memorised, in his head.” (The Economist, “Claudio Abaddo” obituary, Feb 2, 2014)

“In rehearsal this was almost his only word, accompanied by a gesture, finger to lips, or one of his quick, dazzling, toothy smiles, or a sudden glance of the eyes that were, he thought, his most effective tool. He did not dominate the music, but was its servant. So no shouting, like Toscanini. No furious baton-play or maestro posing, like Karajan, whom he had succeeded in 1989 at the Berlin Philharmonic.

Listening to other musicians, orchestras become more cohesive and the sound is almost like that of chamber music.
Abbado also knew these magical moments disappear as suddenly as they occur-- always different, never the same.
That’s the thing about listening—it’s about receiving sounds & voices so as to absorb and be transformed by what we hear. To listen better we have to practice. And listening to others is not just what music is all about, it’s about learning and growing through trust and deepening relationships. It’s about the joy of being humble enough to receive God and God’s presence in our lives.

Listening is at the heart of education, which is why I mention it on Theological Education Sunday. 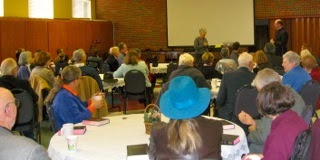 It takes many forms (visual, auditory, sensory), but is the only way to understand someone else’s life and experience. Yet most people today have been taught the opposite. We are told and we even believe that what is important about an education—and a life—is to express your opinions, to tell the world what we think. All day long, -- and I’m guilty of this too--we text, we tweet, we post our status updates on our Facebook pages. We are thus in danger of eclipsing listening, and without it, we cannot access lives, experiences, and beliefs that are different from our own. We cannot create trust. Learning how to truly listen may be the most important global lesson of all. And by showing up here in the Cathedral we are doing just that. Like Simeon and Anna we are ceding control to God: we are open to hearing because we trust.

Simeon and Anna are true saints of Israel. They seem to have lived their lives open to the Spirit.  As prophets they reach out to hear, touch and hold. Probably frail and able to achieve little that counts in terms of worldly value, they are wise to the things of God.
Ears can be deaf to the sounds and voices of others. But the ears of Simeon and Anna, and through them our ears, can undo isolation and dishonor by listening, valuing, inducing trust, respecting others and thus growing in faith and love of God.
Let us pray in the words of St Theresa:
Christ has no body but yours,
No ears but yours, no feet on earth but yours,
Yours are the eyes through which to look out
Compassion to this world,
Yours are the feet with which he walks to do good,
Yours are the ears, through which he blesses all the world. Amen.