Was the apostle Junia a woman?

In an article from the Star-Telegram for Oct 28th 2006, on former Texas journalist Rena Pederson's new book The Lost Apostle, Searching for the Truth About Junia (Jossey-Bass, 2006) are some astonishing opinions.

In Romans 16:7 Paul says: "Greet Andronicus and Junia, my relatives who have been in prison with me. They are outstanding among the apostles and they were in Christ before I was."

Against the argument that Junia was a prominent woman apostle before Paul (an argument that has patristic traction as well as the support of modern translations like the NRSV) is Southwestern Baptist Theological President Paige Patterson.

Pederson quotes Patterson as saying, "I'm not arguing that Junia isn't a woman. It is very possible she was, but it can't be proved. Even if it is a girl's name, it doesn't mean it's a girl. I was placed in a girl's dorm because my name is Paige, just like a boy named Sue. ...But the point is there is no way to establish that Junia was in fact a female. The attempt to make her one of the apostles, based on a suspect text...is an agenda looking for a reason."

Not content with an argument based on his own experience of having a gender neutral name, Patterson added in an email to the article's writer that "apostle" has both generic and specialized meanings: "Even if Junia were female, which cannot be demonstrated, the text in question would still not establish that she functioned as Peter or Paul, a position of apostolic authority. The word 'apostolos' means 'one who is sent' and whether Junia is male or female, the text means only that that individual had a calling from God to share the Gospel. Evangelicals have always argued that women can and should do this."

1) Since the name Junia appears widely on gravestones, inscriptions and in ancient writings as a woman's name, isn't it likely that Junia is a woman in Romans 16:7? The contrary argument is that the form in Rom 16:7 "Junias" is not an accusative but a diminutive of the name "Junianes." Dimunitive forms of this male name occur far less frequently in ancient texts.

2) Arguments from modern gender-neutral names like Cooper, Paige, and such are irrelevant to study of ancient names. Shouldn't a seminary president know this?

3) There's no evidence that I know of to distinguish between generic and specialized meanings of the term apostle in ancient texts. This is the kind of separate but equal argument used to deny a class or group of people access to priviledge or power. It is a modern rather than an ancient interpretative tool.

All of this goes to show that interpreting the roles and offices of women in the NT still has existential relevance.
at October 30, 2006 1 comment: 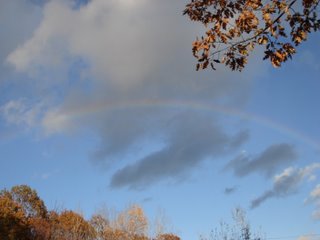 Yesterday evening in the mix of glorious fall weather we've been having in Maine, a rainbow appeared in the sky just about an hour before sunset. This is to share for people not on sabbatical :)
at October 26, 2006 1 comment:

Perusing a reviewers blog from the Library Journal, I came across this!
Scroll down on the left side to the advertisment...(it comes and goes, to be sure, along with other books).

Thanks to Reverend Dr Mom for a fabulous weekend in the rectory at Barnstable on beautiful Cape Cod going back and forth to St. Mary's for talks with parishioners about the origins of the Bible and a book signing for Jesus' Family Values!
at October 23, 2006 1 comment: