How To Do Things With Fictions by Joshua Landy (OUP 2012)

"Let the reader understand!" Landy argues that reading literature like Jesus' parables in Mark's Gospel is not so much about gaining insight and moral improvement but to train the reader or listener. To be trained to this level, one much look beyond propositional content. The right reaction to parables is not interpretation but the production of figurative content.
The Guardian review of Joshua Landy's splendid book by Stephen Abell says that:
Landy is at his best as a close reader when he is examining Mark's gospel, or discussing "the cosmic magnitude" of Mallarmé's "ses purs ongles" sonnet.
The reading of Mark focuses on the Parable of the Sower (in which the metaphor of sowing seeds is used to explain why religious messages do not always flourish: some fall on fertile ground, some on rocky etc). Landy seeks to explain why Jesus actually admits – in a famously disputed passage – that he does not want to convert everybody who listens to him: "for those outside, everything is in parables; so that they may indeed see but not perceive, and may indeed hear but not understand; lest they should turn again, and be forgiven".
This is gripping stuff, for believer and atheist alike. Why would Jesus, of all people, not want sinners to be forgiven? Landy's answer is that the understanding of metaphorical language is essential to faith itself: if one cannot move from the visible to the symbolic, then one can never comprehend God. Jesus uses non-inclusive language because he only wants those with the capacity for genuine belief to follow him. As Landy triumphantly concludes: "the Sower is a meta-parable, a parable about parables, a parable that only indirectly concerns the kingdom of God, being focused, rather, on the ability to handle figurative language".
When we read the parable, then, it is the very experience of reading that is crucial. That is why it is used to support Landy's theory about the self-consciousness of fiction. Elsewhere, we are readily convinced that Chaucer is parodying didacticism in "The Nun's Priest's Tale" and Plato is undermining Socrates by giving him weak arguments so that the reader will learn about the perils of flawed thinking. The quondam impenetrable poetry of Mallarmé is characterised wonderfully as "training in the two skills that make life bearable: generating fictions, and persuading ourselves that they are true".
at September 29, 2013 No comments:

This coming Wednesday I will be beginning a course in Scripture Studies and the reception history of the Bible. Anyone in and around NYC is welcome. Come one, come all! 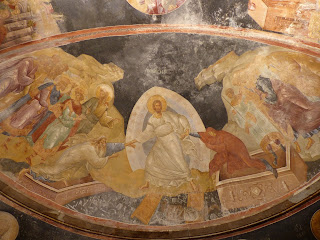 Amongst other things, we'll be reading NT texts, listening to music connected to biblical texts and discussing art connected to Christian themes and biblical texts. We'll be looking at the Anastasis panel from Chora Church in Istanbul (Kariye Müzesi, Kariye Camii, or Kariye Kilisesi — the Chora Museum, Mosque or Church)
at September 17, 2013 1 comment:

Over twenty years ago, I went on my first sabbatical to Apulia (Italian: Puglia) in Italy to look at late Byzantine frescoes. True, it is not what you might expect from an NT scholar but I was in search of images of Jesus as Sophia in Byzantine tradition. Some exist in abandoned churches, others do not. I presented the results of my research on a specific fresco with the Greek inscription "Sophia, the Logos of God" to a Byzantine Studies conference once I was back in the NE, only to be told that what I had shown was "an anomaly in Byzantine thought." End of discussion? Until now.

Here's a wonderful new 360 degree view of the XIV Century frescoes of that church in Soleto. In the  Apse of the east end is the image of Sophia with the Greek inscription above. A specific study of that church has been published (2010). All being well, I will be able to publish a discussion of the frescoes and this particular image within a year or so. I am arguing that ignoring such frescoes or relegating them to a category of "late Byzantine" or even "non-Byzantine" creates unhelpful categories of what is normative (art and architecture in Constantinople?). Byzantine art in Salento is a transformation of Greco-Roman and Byzantine art with regional features.
at September 08, 2013 No comments: