The BBC reports on the perilous state of Pompeii, a World Heritage site, including recent collapses at the House of the Gladiators due to heavy rain.
at June 25, 2013 No comments:

Under "topics to explore" is "Same-Sex desire & gender identity" on the British Museum website. If you are around, there's a lecture on June 28th:

Richard Parkinson, British Museum, discusses a recently published British Museum project on the history of same-sex desire.
The talk will explore issues raised by objects in the collection, ranging from ancient Egyptian papyri to modern gay love scenes filmed in the Museum, to ask a question that concerns us all: how easily can we recognise love in history?
In collaboration with Write Queer London.
at June 25, 2013 No comments:

Robin Lane Fox: "Alexander & the Gods" at the Hellenic Society

is on Choral Evensong from St Paul's Cathedral on BBC Radio 3 for 7 days. Here's more information about the composer Judith Bingham and from the BBC.
at June 19, 2013 No comments: 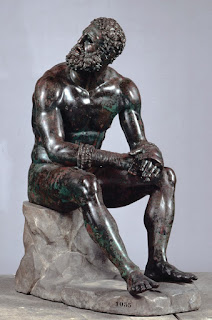 One of the great masterpieces of Hellenistic sculpture is making a brief visit to The Metropolitan Museum of Art. Made sometime between the late fourth and the second century B.C., this life-size bronze depicts a battered and weary athlete resting after a fight. The work is astonishing both for the gripping realism of the anatomy and the touching pathos of the expression.
at June 18, 2013 No comments:


Discussion on the BBC Radio programme In Our Time on Zenobia, (240 – c. 275 Greek: Ζηνοβία Aramaic: בת זבי Bat-Zabbai Arabic: الزباء al-Zabbā’) intellectual military leader of Palmyra b. 240 CE who became Empress of the Palmyrene Empire in the Middle East which she extended to Ankara in Asia Minor (modern Turkey), Egypt, the Holy Land to the Euphrates. Palmyra appears in the Bible as Tadmore (2 Chron 8:4; 1 Kings 9:17), fortified by Solomon.

Prof Kate Cooper has some fascinating reflections after the programme:

One of the most fascinating questions about Zenobia is what she thought she was doing.  Was the establishment of her empire intended as a revolt against Rome, as many believe? Or was she simply, like so many after her, trying to bring peace to the Middle East?
at June 01, 2013 No comments: