I can add one piece of information to the NY Times report by Eric Pfanner about the exclusive coverage of MP tax funded expenses from the Daily Telegraph. I happened to be in the the UK last week when my mother took a phone call that began by asking what newspaper she subscribed to. "None," she replied. (We bought the Times and the Guardian on several occasions during my stay. My parents also buy local papers which come out weekly.) The caller then proceeded to ask whether she would be interested in subscribing to the Daily Telegraph. It was obvious that the MP expense scandal was being used to promote the newspaper and increase circulation.
at May 31, 2009 No comments:

Receiving royalty cheques --as I did today--is a humbling experience. And in case the microscope isn't readily available, there's always the annual reminder in the tax returns. It doesn't matter whether the payment is for an article or two or book sales or even advance royalty payments, it's always very very small. "Don't quit your day job," says my supportive wife as we deposit these tiny cheques in the bank.

So why do I keep agreeing to write articles and books? Why am I thrilled when acquisitions editors send inquiries about possible publications? Because there really is nothing like the frisson of working hard at saying exactly what you want to say and then seeing it in print. It is its own reward! And if anyone also likes it and writes positive reviews, that's all icing on the cake.
at May 30, 2009 2 comments:

Marilynne Robinson interviewed by Emma Brokes of the Guardian 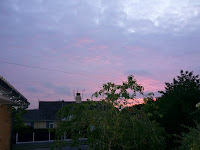 A good interview of Marilynne Robinson by Emma Brokes is in today's Guardian Review section. Her recent novel "Home" is a contender for the Orange Prize.

Robinson's brilliance is in seeing the gaps between words as forcefully as the words themselves; all those rapid calculations as people test an exchange for hidden content, condescension, disingenuousness beyond polite necessity. "She is one of the most intellectually ambitious novelists in English," says Sarah Churchwell, a lecturer in American literature at the University of East Anglia and one of the Orange judges. "She trusts her readers to be able to think, to appreciate language for its own sake; and while she is morally serious, she is never humourless."

This kind of reflection has a particular resonance with my life having concluded two weeks with the aged p's during which time we lived in as ordinary a way as possible; laughed, mused, cried and discussed living and dying. As we wait to hear about treatment options next week, I'm back to blogging.
at May 30, 2009 No comments:

Appropriately on Ascension Day, I must take a break from blogging (as will have become already apparent) as my father has cancer. I am presently in the UK helping he and my mother with scans and treatment options. For all the prayers and support, we are very grateful.
at May 21, 2009 6 comments:

Women in Pauline Letters and Why It Matters

On the face of it, my recent talk on women in Pauline letters was pretty straightforward.

Concentrating on the genuine Pauline letters, and particularly on the women mentioned in Romans 16, I also prepared a handout on Ephesians 5:22: "Wives, submit yourselves unto your own husbands, as unto the Lord" emphasizing that the verb "submit" is an inference from the preceding verse and absent from the Greek text.

After noting that Phoebe is a diakonos and an epistates, deacon and benefactor, I moved on to v.7:
"Greet Andronicus and Junia, my relatives who were in prison with me; they are prominent among the apostles, and they were in Christ before I was." The history of interpretation of this verse is quite fascinating. In antiquity, Junia was understood to be a woman. But in the 14th Century, interpreters proposed that the accusative form Junias should be understood as masculine and that these figures were two men. Something of this translation is evident in the KJV translation, "kinsmen." Only in the 20th Century has the recovery of Junia as a woman been undertaken.

Pausing for questions, a hand was raised from the front row. It's owner happened to be a man. "Isn't it possible that there is a prominent group including women and another group of apostles?" Astonishing, I thought. And I replied, "No! The translation infers that there is a group of apostles amongst which are prominent figures including Andronicus and Junia." This was not well received and remonstrations followed. So I thought about a response that would stipulate the heart of the matter. "Do you think there were women apostles in early Christian communities?" Clearly, my interrogator did not think so.

By this time, other hands were waving indicating enthusiasm for joining this partisan discussion. Their owners noted Mary Magdalene, apostle to the apostles. What about other Pauline letters asked a query from another man at the back of the room? There aren't any other women in any of Paul's other letters, are there. Remarking that our exchanges show that these texts have a dynamic resonance felt today, on we went to Ephesians 5.

When I went to leave for the airport via a car service, my first interrogator followed my host and me up the stairs and out of the door to the car all the time insisting that I pay attention to things he wanted to say and other sources I should read. "No," I said firmly, turning to say goodbye to my host, "I am leaving for the airport and I have no time." And as I left, I could see out of the car window that he was interrogating my host.

Even as I rejoice that this particular struggle is mostly over in our church and I thank God for the witness of women bishops, priests and deacons, I wondered if there was a better response I might have made.
at May 17, 2009 2 comments:

In preparation for a TV special on Abraham, Sarah and Hagar, I've been reading Philo on Abraham and Sarah and Hagar in On Mating with the Preliminary Studies. Philo has some alternative interpretations of unresolved tensions in the biblical narratives:

When, therefore, you hear that Hagar was afflicted by Sarah, you must not suppose that any of those things befell her, which arise from rivalry and quarrels among women; for the question is not here about woman, but about minds; the one being practised in the branches of elementary instruction, and the other being devoted to the labours of virtue.

Philo's allegorical endeavors are a fascinating counterpart to the allegory of Sarah and Hagar in Galatians 4. On the history of the interpretation of Hagar, John Thompson, Reading the Bible With the Dead (Eerdmans 2007) has some interesting things to say. I will post news of when this program will air later this fall.
at May 13, 2009 No comments:

The synagogue mosaic floors of Upper and Lower Galilee in Ancient Israel have largely been examined in a social and religious context.

Yet, scholars have not been able to assess the meaning of the mosaics' exact placement in the synagogue buildings and their connection to liturgical process. Given that the second commandment in Judaism prohibits the depiction of graven images, the nature of patrons' wishes and the artisans raise questions about their reliance on Greco-Roman principles, while adhering to halakhah. Specific scenes of the Akeidah and abstract images of the zodiac and temple structures throughout the Galilee show a break with the past. In this paper I posit through an art historical approach that the mosaics were not simply decorative elements but reminders to the participants within the buildings of their heritage and past cultures, connecting them with the past, present and future.

Rachael Goldman holds degrees from Rutgers University, Sotheby's Institute of Art and City University of New York-Graduate Center in Classics and Art History. She is working on a manuscript dealing with the social and cultural constructions of color in the Rome Republican and Imperial periods. She has studied at the American Academy in Rome in 2007 and has won fellowships from the New York Classical Club, the College Art Association and the Archaeological Institute of American.

Prof. Goldman is published in the Bryn Mawr Classical Review and the Journal of Decorative Arts of the Bard Graduate Center.

Managed to read Lavinia on yesterday's flight back from California and so I was pleased to find Ursula Le Guin's explanation of her novel from a talk given on May 1st in NYC: it is based on the Aeneid and the topic of war situated against the background of the war in Iraq. Here's the Latin text on Perseus.