How to help the Church by Tom Hanks

According to several sources e.g. Ananova Tom Hanks thinks the DaVinci Code movie could help ministers increase congregations by hosting discussions to accompany the movie's release in May. He points out that 12 people might show up for a discussion on this week's gospel but 800 are likely to attend a discussion on the DVC.

Perhaps this is the occasion to announce an A&E program on the DVC movie to be shown on May 18 including interviews with Elaine Pagels, Diane Apostolos-Cappadona and yours truly?

Speaking of help, has anyone noticed an exclusive interview Presiding Bishop Frank Griswold gave to the Guardian last Friday ? It seems not to have caught the attention of Anglicans on line last Sunday. I quote the opening paragraph which I do not think violates copyright:-

"The leader of the US Episcopal church, which is in danger of being expelled from the worldwide Anglican communion for its election of an openly homosexual bishop, has warned parishioners of the diocese of California that they would widen the confrontation it they chose another gay bishop...."

Griswold then goes on to say that he hopes the diocese of California will exercise caution in the forthcoming election, adding that it will then be up to the House of Bishops to give or withold their consent. The interview concludes by observing that perhaps it is the work of the Evil One to make us fixate on sexuality rather than more urgent matters like poverty, disease and civil war.

A quick perusal of the nominees from the website of the Diocese of California indicates a broad range of people from many different backgrounds with good experience. Let's pray that the Holy Spirit will blow on and around the election in a couple of weeks as it falls under a media microscope.
at April 26, 2006 1 comment: 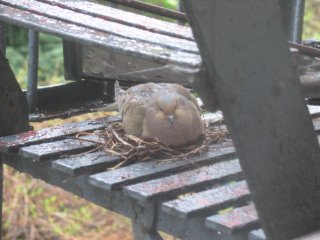 Yesterday we noticed that a pair of Mourning Doves had built a nest just outside our kitchen window on the fire escape.

This morning I saw a changing of the guard as a dry parent changed places with a wet one from the morning rain. The weekend forecast is more of the same so neither will stay dry for long.

In the changeover I saw two eggs in a rather threadbare nest. The site however is somewhat protected by a window screen haphazardly balanced on the last step of the fire escape. And we offer nyger seed in our feeder from the same window so there is a fairly regular food supply. Its not half as exciting as Pale Male of course, but its a lot closer. Perhaps I'll finally be able to tell one mourning dove from another (including male from female). 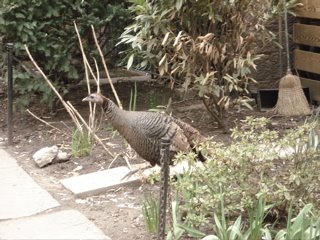 For several weeks now, a wild turkey has been happily ensconsed in the grounds of our seminary eating grass seed. She is impervious to passing dogs, children, construction crews, scaffolding, and other challenges. The picture above is of an early siting. She has been named "Glorvina" by seminarians after the sister of one of our most munificent benefactors, Dean Hoffman. The picture below is taken today. If I'm not mistaken and its the same bird, she is growing wattle. 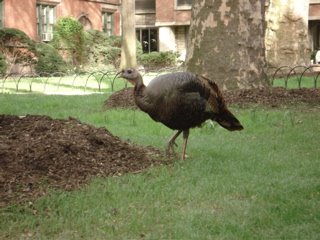 Another wild turkey has recently been released in Morningside Park according to news reports. Her name is Hedda Gobbler.

Glorvina is a reminder for me of the transient nature of our comings and goings in educational institutions. How she arrived is a mystery. How long she will stay is unknown. Yet there she is each day going about the business of survival causing interest and delight as one of God's beautiful creatures.
at April 21, 2006 No comments:

Here is yours truly doing a video interview on the Gospel of Judas during Holy Week!
at April 16, 2006 No comments:

Soy immigrante del UK! I am an immigrant from the UK!
For this and reasons of justice, a divine mandate, I joined thousands of people at City Hall on Monday of this week to encourage congress now in recess to consider legislation that will recognize the civil rights of illegal immigrants and others to the US economy rather than separation of families and criminalization. Eleven milllion undocumented immigrants should not be deported.

We heard from Rep. Charles Rangel and Senator Hilary Clinton in support of the legislation. We heard from a Rabbi who reminded us of the season of Passover and a nation of slaves. A Buddhist leader spoke. Everyone was waving American Flags and shouting in pauses between speeches, "We March Today, We Vote Tomorrow!" (Hoy marchamos, manana votamos!) or "Si se puede!" (Yes we can!). Amongst the thousands I saw Irish groups, Asian groups, and religious coalitions from the UMC, and Judson Church. Beliefnet comments on participation of religious leaders across the country. People power indeed!
at April 12, 2006 1 comment:

Alas, I found the National Geographic Special on the Gospel of Judas on Sunday night disappointing. The text was discussed only in the final 15 minutes and then presented in such a way that it conformed to the approach of the whole program, namely, to situate the gospel in a time and place of the week before Passover. The laughter of Jesus (which is a leitmotiv of the Gospel of Judas) took place at the same table setting as the last supper; so too the appearance of Jesus as a child--but in the gospel they are descriptions not events. The program promotes a "historical approach" in spite of counterindications in the text. I'm going to talk more about this elsewhere.

The hype surrounding the Gospel of Judas in the week before Easter is remarkable. Few people attend to reading and interpreting other non-canonical gospels also situating themselves in the week before Easter. The second-century Gospel of the Savior, first published in 1999 by Charles Hedrick and Paul Mirecki, languished in a Berlin library for 25 years before Paul Mirecki noticed it in 1991. Perhaps dependent on oral traditions in the gospels of John and Matthew, the Gospel of the Savior knows an oral tradition of Revelation and material that ended up in The Gospel of Thomas. The Gospel of the Savior takes place between the Last Supper and the handing over of Jesus in the garden. The Savior converses with the disciples. The scene shifts to prayers in Gethsemane which take place on a mountain within the divine throne room. There a dialogue between God and the Savior occurs witnessed by all disciples who are in no danger of falling asleep. Jesus' predicts his resurrection in language from the gospel of John.

Let's read and evaluate all gospels pertaining to Holy Week not just one that National Geographic wants to promote.
at April 11, 2006 2 comments:

The entire text (Coptic and English) of the Gospel of Judas is available with discussion here. On Sunday night at 8pm eastern time there's a program on the Gospel if you haven't caught articles in the New York Times and elsewhere.

A first reading indicates that this is a straightforward Coptic Gnostic gospel in which Judas is the recipient of special teaching just as Thomas is in the Gospel of Thomas and Mariham in the Gospel of Mariamme.
at April 07, 2006 1 comment: