BBC Radio 4 in the series Great Lives with Matthew Parris: tomorrow, August 31st, at 4.30pm Eleanor Bron discusses the life of the French philosopher and mystic Simone Weil. Available after the program and for quite a while.

Update: the programme discusses her work with Elanor Bron and Grahame Davis and the unlikelihood that she committed suicide.

Presentation: How Many Judaisms Were There?
Seth Schwartz, Jewish Theological Seminary
This paper is a critique of the idea of Judaismlessness, which shares with its predecessor -- the idea that there were "Judaisms" in antiquity -- the fact that it is rhetorically extreme shorthand for a set of ideas which, whether or not they prove to be valid, certain merit careful analysis. On one level, the correct response to Judaismlessness is straightforwardly empirical: Steve Mason may be battled effectively on his own positivistic turf. But Mason's argument, and Boyarin's appropriation of it, also raise fundamental issues about the entire project of writing about ancient Judaism (for lack of a better formulation), chief among which is in my analysis of the following: given that, strictly speaking, we can never eliminate anachronism and ethnocentrism (which amount to much the same thing) from the way we think about an "other," what then are we entitled to say about it? This may seem a rather strange and general concern to derive from a small body of scholarship about a small group (if that is what they were) of people who ostensibly lived long ago, but for various reasons, some of them a result of the character of the ancient sources and others of modern interests, the Jews provide an opportunity to address these issues in an especially focused way. One of the core critiques of "Judaism" is that the word apparently denotes a religion, a category whose applicability to antiquity, indeed perhaps to any period before the Enlightenment, is questionable, or at least debatable. I will argue for a pragmatic but highly cautious approach to the issue, while acknowledging the validity of the critique.
Key readings:
S. Mason, "Jews, Judaeans, Judaizing, Judaism: Problems of Categorization in Ancient History," JSJ 38 (2007) 457-512.
D. Boyarin, "Rethinking Jewish Christianity: An Argument for Dismantling a Dubious Category (to which is Appended a Correction of my Border Lines)", JQR 99 (2009) 7-36.
Additional readings:
M. Satlow, "Defining Judaism: Accounting for 'Religions' in the Study of Religion", JAAR 74 (2006) 837-60.
T. Asad, Genealogies of Religion: Discipline and Reasons of Power in Christianity and Islam, Baltimore: Johns Hopkins University Press, 1993, 27-54.
C. Brumann, "Writing for Culture: Why a Successful Concept Should Not Be Discarded", Current Anthropology 40, Supplement, (1999) 1-13, with responses following, especially Lila Abu-Lughod and Ulf Hannerz.
B. Nongbri, "Dislodging 'Embedded' Religion: A Brief Note on a Scholarly Trope", Numen 55 (2008) 440-60
S. Cohen, The Beginnings of Jewishness: Boundaries, Varieties, Uncertainties, Berkeley-Los Angeles: University of California Press, 1999, 109-39.
at August 26, 2010 No comments: 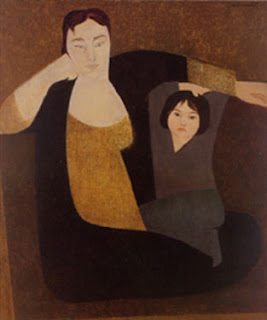 In a new documentary by Dale Schierholt on Will Barnet, the artist explains that this image -- showing his wife and their child--separates the child from her mother, unlike traditional Madonna images. The strong lines, he says, are impressionistic. The documentary is very engaging and informative.
at August 22, 2010 No comments: