Spaces in which to articulate cultural criticism and community building

A wonderful piece in the New Republic by Josephine Livingstone (Feb 27th 2017) argues that cultural criticism, when best understood, open up larger horizons of meaning that are neither reactive to the present political climate nor self-indulgent. We can be both on the streets in protests and build communities of meaning. This seems to me immensely helpful.

In the Roman Imperial period, for example, Lucan’s political epics are far more than reactions to the Emperor Nero. In fact they “work as spaces to reconfigure agency and the political (or philosophical) self.”

"Art is about creating those spaces evident in Lucan’s epics. It’s as if a zone is staked out for a variety of ideas and postures to flex and interact. This zone is the place where the arts play. It is not an apolitical place, it is just not owned by government. In this aesthetic space, the arts explore a less confined politics than the one that controls the state. The state is not the beginning, end, or the reason for this space."

She goes onto cite the work of Sister Wendy Beckett who "gave up her life in the world for God, and then she took time out from God for art. Her example seemed like enough to make writing about art intrinsically, inexplicably worthwhile. But now, all these years later, I see that Beckett’s book was an act of service. She did not just commune with the artworks, she wrote about it, to an audience. In this way, Beckett gave me a community made of words. I will never forget how in one caption to a Picasso painting Beckett described its 'frankly rendered pudenda.'"
at March 03, 2017 No comments: 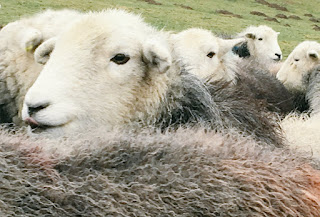 It includes daily doings, landscapes, and farm animals especially sheep like these with witty captions:

WEAR BRITISH WOOL. ALL THE MOST STYLISH LADIES DO.

And today I discovered that Mr Rebanks has an op-ed piece in the NY Times: "An English Sheep Farmer's View of Rural America." Promoting his book, he travelled through Kentucky. The whole article is worth your reading.

"After my trip to rural America, I returned to my sheep and my strangely old-fashioned life. I am surrounded by beauty, and a community, and an old way of doing things that has worked for a long time rather well. I have come home convinced that it is time to think carefully, both within America and without, about food and farming and what kind of systems we want.

Despite the growing scale of the problem, no major mainstream politician has taken farming or food seriously for decades. With the presidential campaign over and a president in the White House whom rural Kentuckians helped elect, the new political establishment might want to think about this carefully.

Suddenly, rural America matters. It matters for the whole world."
at March 01, 2017 No comments: