This new book by Derek Olsen from Forward Movement) looks very promising. Here's an interview with the author. After I read it, I will post some comments which may turn into a review.

The Prayer Book as Guide to a Spiritual Life

Have you ever wondered if there was some kind of guide to living a deeper, richer spiritual life that seamlessly incorporated scripture alongside the wisdom of the Church? There is—and you can find it in a pew rack near you! The Book of Common Prayer is more than a service book; it is a map to a deeper relationship with God, a framework for developing a more intentional and rewarding life of faith.

Scholar Derek Olsen explores liturgical spirituality and how the prayer book serves as a repository of Christian wisdom and spiritual practice stretching back to the beginnings of the Christian movement. Focusing on three key elements—the Calendar, the Daily Office, and the Eucharist—he discusses the spiritual principles behind them and provides clear, practical, easy-to-follow explanations of the services. These patterns of life laid out in The Book of Common Prayer serve as a guide to the spiritual life, so that we might connect back to the God who calls each of us by name and that we might love as God loves us.
at October 29, 2016 No comments:

What Scripture will you use for your Same-Sex Wedding Service?

Here's the last video in the Trinity series this past summer on the Bible and Marriage, this time on "Scripture Choices for Same-Sex Marriage services."
at October 20, 2016 No comments:

The NY Times reports the return of a controversial sculpture "Christa" by Edwina Sandys as part of an exhibit in The Cathedral of St John the Divine from October 6 to March 12, 2017. 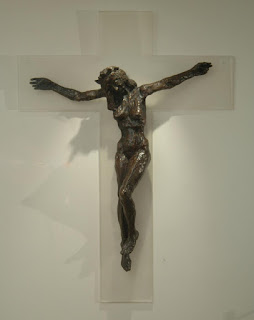 Shown first in London in 1975, Christa is
the first representation of a female Christ
on a cross. It has been exhibited in galleries and churches in Rome, Toronto, New York, Washington, Kansas City, and at Yale and other universities over the years.
at October 06, 2016 No comments: