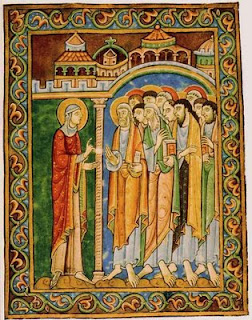 A Miriamic Procession
The Miriamic procession is both auditory and visual. From it comes a map of both sight and sound. The sound map starts with the glorious song of Miriam. She sings the ancient "Song of the Sea" in Exodus 15 celebrating Israel's deliverance with music and dance. Her performance on behalf of the nation reflects a female musical tradition identified and described Israelite tradition. This Miriamic strand in the story of ancient Israel not only signifies a special place for women as those who first recognize and give voice to God's salvific deeds but also contributes to a wider understanding of the possibilities for women in Israelite society.
The Miriamic procession continues into the New Testament and beyond--from the birth stories through the ministry of Jesus and on to the empty tomb and resurrection accounts. Echoes of Miriam's song resonate in the Magnificat, the lament psalms of Pistis Sophia, the Manichaean psalms, Peter Abelard's Easter sermon, and medieval and baroque music of the east and west. Refracted images of Miriam's vision appear in the gospel of Mary Magdalen and in Christian art.
Mary Magdalen is first to discover the empty tomb and the first to proclaim the resurrection. John's gospel reports her subsequent meeting with and proclamation of the resurrected Lord to the apostles. In their meeting, each calls the other's name. This exchange of names becomes an interchange of sight and sound. We see them side by side. Noli me tangere is yet another classification of their visible and audible dialogue in Christian art.
As already noted, the writer of Luke's gospel forges aural and literary connections between Miriam and Mary, the mother of Jesus. Luke's gospel and the extracanonical birth story of Jesus known as the Protevangelium of James exploit and subvert ancient images of virginity either to advance or suppress the Miriamic tradition.
The Miriamic Vision
Both the fourth gospel and Mary of the Gospel of Mary show Mary as prophet and originator of mission. Attention to Mary's vision as emblematic of early Christian prophecy helps to eradicate the overly rationalized division between resurrection and ascension proposed by Luke. In conjunction with a prophetic and charismatic Jesus movement, the experience of Mary Magdalen is continuous with the vision of John the seer in Revelation and the new prophets all of whom saw the risen Lord.
Vision however is not stasis. Quite the reverse. Christian iconography outlined by art historians and depictions of Mary in Christian Art identify an anonymous group of women processing to the tomb in early third-century frescoes. In the fifth-century a discrete Mary Magdalene emerges within the context of "women at the tomb." By the seventh century, she is singular witness and apostle in images that who she is and what she sees. Here, artistic evidence complements textual arguments for original anonymity and composite identity. In a sight map, Titian's Noli Me Tangere may result from the Chairete of Byzantine iconography.

There were some in the early church who envisaged Mary of Nazareth as a teacher of secret wisdom who enlightened the apostles. Numerous early Christian apocrypha, including several so-called “gnostic” texts, include a character known as “Mary,” whose identity is usually otherwise unspecified. Generally, this “Mary” appears as an associate or, sometimes, as a rival, of the apostles, who is filled with knowledge of the “gnostic” mysteries. Although scholars have persistently identified this Mary with Mary the Magdalene, rather than Mary of Nazareth, this interpretive dogma is based on evidence that it at best inconclusive.  Many features of this character’s representation point also to Mary of Nazareth. The traditions of the Virgin Mary’s Dormition (her “death”) in particular present Mary of Nazareth in a light that is strongly reminiscent of the gnostic Mary figure. Thus the gnostic Mary, it turns out, is best understood as a composite figure, drawing on the identities of both the Magdalene and the Virgin (among others), rather than being the representation of a single historical individual.
Subsequent Muslim exegetes of medieval Andalusia argued intensely for the priesthood of Mar, mother of Jesus and for women who received revelation through the angels or directly from God. Feminist analysis of the issues of Mary's prophethood not only betrays the androcentric readings projected onto the text by Muslim exegetes of the east but demonstrates the signs of Mary's prophet hood ('lamat nubuwwat Maryam) well established in the Qur'anic text.
at July 21, 2012 No comments:

Prof Mark Edmundson, a professor of English at the U of Virginia has a provocative piece in the NY Times about the limitations of online education.

Particularly valuable to me is his discussion of good teachers and lecturers intuiting a class. They deploy something tantamount to artistry. They are superb at sensing the mood of a room. They have a sort of pedagogical sixth sense. They feel it when the class is engaged and when it slips off. And they do something about it. Their every joke is a sounding. It’s a way of discerning who is out there on a given day.


I also enjoyed the point about the unique classroom experience that cannot be replicated and the anonymity of online education.

Not long ago I watched a pre-filmed online course from Yale about the New Testament. It was a very good course. The instructor was hyper-intelligent, learned and splendidly articulate. But the course wasn’t great and could never have been. There were Yale students on hand for the filming, but the class seemed addressed to no one in particular. It had an anonymous quality. In fact there was nothing you could get from that course that you couldn’t get from a good book on the subject.
One aspect of this is considering the online participants. In the podcast I just posted, I tried to speak directly to and engage the viewers by looking directly at the camera and speaking without notes. The focus is not a filmed discussion elsewhere with a class but speaking to the viewer.

The public house and rituals of patronage in Pompei

"The domus or 'private house'... was not 'private' in the sense that we usually mean. For us, 'home' is firmly separated from the world of business or politics ... [In ancient Rome] the domus is treated as part of the public image of its owner, and it provides the backdrop against which he conducts at least some of his public
life. ...

"The Roman elite, those holding public and political office, needed grand 'common' areas of a house.  Those lower down the social spectrum could do without a grand vestibule, atrium, or tablinum (the name given to a relatively large room)...

"The relations between men of the elite and their various dependants [have been re-imagined by] archaeologists [regarding] how one characteristic [of] Roman social ritual might have taken place in [Pompeii]. That ritual is the early morning salutatio,at which 'clients' of all sorts would call on their rich patrons, to receive favours
or cash in return for their votes, or for providing more symbolic services (escort duty, or simply applause) to enhance the patron's prestige. From Rome itself, we have plenty of complaints about this from the client's point of view in the poetry of Juvenal and Martial, who -- as relatively well-heeled dependants -- predictably
enough made the most noise about the indignities they had to suffer in return for a modest handout. 'You promise me three denarii [Roman currency],' moans Martial at one point, 'and tell me to be on duty in your atria, dressed up in my toga. Then I'm supposed to stick by your side, walk in front of your chair, while you
go visiting ten widows, plus or minus ... '

"In Pompeii, it is easy to imagine how such a social ritual might have taken place within the domus: the clients lined up outside on ... stone benches, then -- when the house doors were opened first thing in the morning -- they made their way through the narrow entrance passage, into the atrium, to wait their turn to speak to their
patron proudly sitting in his tablinum [large reception room for the house master], dispensing favours, or not, as the mood took him.

"In all likelihood, that image is rather too grand and formal for what would actually have happened in Pompeii. Even if in Rome itself the ritual of morning salutatio was as regular and structured as the poets imply ... it could not possibly have been so in a small town. ...

" We can all imagine what it must have been like waiting to put one's case to some bigwig who could choose whether to help you or not (with a job for your son, a loan, or a blind eye to the unpaid rent). There must have been anxieties on the other side too. For, in this world of status and show, patrons needed clients almost as
much as clients needed patrons. Imagine the anxiety and humiliation on the other side, for a patron installed in his tablinum waiting for clients -- and not a single one shows up. '

Nonetheless, these rituals of power, dependence and patronage do help to reveal the logic of the Roman house and its arrangements. These were houses meant for show-- and that idea trickled down, albeit in diluted form, even to those properties which consisted of just a few rooms around an atrium.

Why Same-Sex Marriage benefits all