We all went in to Canterbury Cathedral on Christmas morning in a state of grief and shock as my father died on December 23rd. The anonymity afforded by the Cathedral service was comforting. After the civic dignitaries had been seated, we were unexpectedly offered seats in the nave and so had a good view of the whole service. It was wonderful: good liturgy, good sermon, good music--exactly what we needed.

The sermon is available here. But what it can't convey are ways in which the concern for children was placed front and center in the liturgy.

The procession down the aisle included the normal members of the procession together with the Mayor of the City, members of the city council in all their regalia plus members of their families. At the end came the Archbishop. And then after him came a collection of children of different ages right down to differently abled children and their parents and finally infants being carried by their parents as well. And in your reaction to their place of honor beyond even the Archbishop in the procession, you would have been judged and found wanting. Whoever has eyes to see, let them see.

If you turned from looking at the Archbishop to face forward to the high altar, you would have missed the most important people in the procession. If you thought they arrived late and had joined the procession simply to find places to sit, you would be guilty of dismissing them as children so often are in our services. But if you paid them heed, you would have caught the message of the service: we need to safeguard and value the dependency of children in our world.
at December 27, 2009 1 comment:

Paul was not a Christian (contd.)

Yesterday's NY Times contained a post arguing for a more Jewish interpretation of Paul and referencing an article in the Tablet from November. Actually, this isn't a new idea but rather an old idea with new adherents. In 1977, for example, Krister Stendahl in his book Paul Among the Jews and Gentiles argued that Paul was called not converted.

Today's Religion Dispatches contains a post by Pamela Eisenbaum, author of Paul Was Not A Christian setting out a description of Paul in the context of Judaism. For example, she proposes that we understand justification by faith not as a principle of individual salvation but as a description of the relationship between Jews and Gentiles:

Paul’s condemnations of “justification by works” were condemnations of Jewish Jesus-followers who saw the special laws of Torah observance (Sabbath, dietary laws) in elitist and exclusivist terms, and who were trying to impose those laws on Gentile Jesus-followers as a condition for membership in the Christian community. Paul’s argument with them was that Gentiles did not need to turn themselves into Jews in order to enjoy divine favor. The death and resurrection of Jesus had broken down the barriers that Jewish law had created between Jews and Gentiles.

Paul's call was a mission to the Gentiles. This means Jesus is not the universal means to salvation. Jesus saves, but he only saves Gentiles. Paul wasn’t worried about Jews—they were taken care of because they had an eternal covenant with God in the Torah.

So what about Israel? When Paul says “all Israel will be saved,” he doesn’t mean that all Israel will convert to Christianity—Christianity as a religion hadn’t even been invented yet anyway. He means all Jews and Gentiles will be part of the family of God. This is a challenging and even inspiring vision in which difference is affirmed rather than eradicated.
at December 09, 2009 3 comments:

Yes it's that time of year: the Nativity and the Press 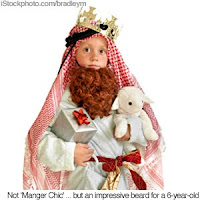 USA Today has a recent article on the Nativity contrasting Borg and Crossan's view in their 2007 book The First Christmas: What the Gospels Really Teach About Jesus' Birth that Luke and Matthew shaped stories of Jesus' birth with Darrell Bock's notion that "early Christians would have taken the Nativity stories as historical accounts that tell us something real about Jesus; they are an important part of understanding who Jesus is." How we might know this isn't clear.

There's a "Living Nativity" on Staten Island and what looks like a wonderful display of international nativity carvings put on by the Mormons in Montgomery, Alabama. I am drawn, however to one in Tampa, Florida featuring a water buffalo as part of a 4-day event that has drawn thousands.

Some parents are spending too much money on "Manger chic," according to a News Lite article from the UK: A high-street store says parents are buying new bridesmaid dresses for angels, fleeced duffle coats for donkeys and jewelled turbans for the wise men. They claim that opting for a 'designer' nativity costume can easily take the cost from almost nothing to £50. In some cases they have seen parents are shelling out up to £150. Apparently, parents whose children have minor roles are outdoing the appearances of Mary and Joseph. Not sure about the "shepherd" shown here though.

Meantime, the BBC has announced that Gerry Adams, the leader of Sinn Fein, will be one of the commentators in a forthcoming new series: The Bible, A History on Channel Four. Mr Adams is to investigate Jesus' teachings on love, forgiveness and repentance. Mr Adams, "as a former supporter of political violence" would also examine the "contradiction between Jesus' teachings and the involvement of Christians, and followers of other faiths, in conflict the world over". Can't wait...
at December 07, 2009 1 comment:

Are feminist books for children a good idea and if so, are there any you would recommend?

Viv Groskop in the Guardian poses this provocative question today. What do you think?

In my childhood, The Secret Garden played a similar role. There is a feisty girl character in the book alongside sickly boys and strong boys. But I also read Enid Blyton whom many regard as racist and sexist and just plain snobbish. Now I like her rather more than I did before since I read recently that the BBC refused to broadcast any of her stories on the grounds that she was "second-rate."
at December 04, 2009 2 comments: 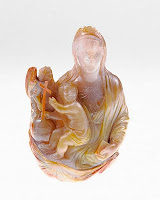 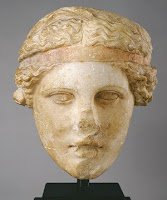 The artist of this work skillfully used the colored streaks in a piece of chalcedony (a variety of quartz) to differentiate flesh color, dress, and the religious symbol of the cross. The Madonna's face is carved from the purest section of the stone, symbolizing her beauty and virtue. The yellow-brown of her diadem and drapery and the Christ child's clothing evokes goldlike splendor. The cross is formed from the brightest vein of red, which alludes to the blood Christ shed during the Crucifixion.
at December 03, 2009 No comments:

I hope I'm not being overly simplistic, but having a big cheese give a bad lecture on campus probably would have the following effects:
And it would also be an(other) example of male lecturing in case anyone needs more of the same.
at December 02, 2009 2 comments:

Secrets of the Lost Symbol is out as an ebook

Secrets of the Lost Symbol is out as an ebook.

Here are just a few of the many essays, interviews, and ideas and you will find in Secrets of The Lost Symbol: