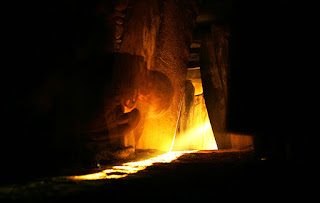 "Experts are beginning to agree that Newgrange, Knowth and Dowth once served as astronomical monuments, noting their level of sophistication. Archaeologists rejected these ideas as fantasies for a long time, interpreting the orientation of the passages at Newgrange and Knowth as coincidental and the incised stones as a set of meaningless geometric designs.
In his 2012 book, “Newgrange, Monument to Immortality,” the Drogheda journalist and novelist Anthony Murphy points out that Neolithic farmers would have had many reasons to pay attention to weather, seasons and the passage of time. He also observes that they would be much more likely to pay close attention to the moon and the stars than we do, with our electric lights and internet data. He considers Newgrange and Knowth epic calendars that measured years, leap years and other temporal cycles.
I widened my range a little — there was so much to see, both in terms of landscape and of historical structures. In Monasterboice, six miles north of the river, there is a circular tower and a crowded graveyard containing the oldest known Celtic cross, still in beautiful condition. Not far from Collon — four miles from Monasterboice — are the remains of an enormous abbey from the 12th century (Old Mellifont), simultaneously neat, airy and spooky. There are towns (Donore, Navan) and castles (Trim, from the Norman period, and Slane, reconstructed in the 18th century, now the site of big rock concerts). There is Drogheda itself.
But Newgrange is the beginning — DNA analysis and archaeological evidence indicate that farming in the region began somewhere around 4500 B.C. It may have been that farmers from the Middle East came up the river in those log boats, discovered the unusual fertility of the valley (a result of the last ice age) and encountered an entrenched indigenous population. But there are no signs of a conflict; either the Neolithic farmers mixed peacefully with the Mesolithic foragers, or the foragers themselves imported agriculture, took those log boats to the east and returned. It was the farmers, having cleared the land and harvested their crops, who had the leisure time to build one passage tomb after another, Mr. Murphy suggested.
Archaeologists and investigators are not finished in the Valley of the Boyne. Many things are waiting to be discovered, put together, understood. As I looked across the rich green flow of the hills toward the setting sun, I expected to come back to this mystery."

Advent is a Marian Month

In a wonderful article in the Washington Post, Nancy Ritter reflects on the Virgin Mary. 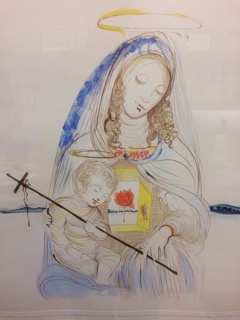 Here's her conclusion:
I think of Mary, and I am grateful.
I think of Mary, and I am comforted.
I think of Mary, and I am exultant.
I think of Mary, and I am enraged and grieved and ashamed that the sons of men should seek to steal, kill and destroy the daughters of God.
I think of Mary, and still I believe, that what God has spoken to her will someday be accomplished in us all.
Advent is a Marian month. In it we observe the feast of the Immaculate Conception (hers), the Annunciation and stories of Jesus' birth. Syrian Christian Tradition celebrates in the Sundays before Christmas a series of annunciations: to Zechariah, to Mary, her Visitation (to Elizabeth), and to Joseph with the nativity of John the Baptist.
Official Christian teaching has always sought to dissociate Mary from her female identity in these ways: she gave birth to Jesus painlessly and without sexual intercourse (virginal conception) and is thus a model for consecrated virgins; she is God-bearer (Theotokos) of a child both human and divine; she herself is sinless (immaculate conception) and does not carry the curse of Eve. Yet women in Christian tradition continue to identify with Mary precisely because she is a woman.
In 1877, for example, an American missionary tried in vain to correct the notion that Mary interceded for women in Ottoman Armenia. She reported an encounter:
"There was another very religious women I once met with in one of the villages on Harpoot plain. She said, 'Lady, I love you, and think you are a real Christian, but one thing you say I cannot receive. You say the Virgin Mary is not our intercessor. What should we women do, if we could not call upon the Virgin when in trouble, or suffering? She was a woman, and knows how to pity women like us.' This is what they all say."
(The photo is a print by Salvador Dali)
at December 04, 2016 No comments: