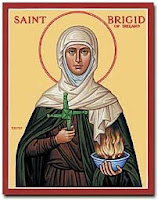 Brigid of Ireland—the patron saint of poets, blacksmiths, and healers—was born at Fauchart near Dundalk c.450. She was the daughter of Dubhtach, poet-laureate of King Loeghaire, and his bondmaid Brotsech. Because of the jealousy of Dubhthach’s wife, Brigid and her mother were forced into slavery. She spent her childhood serving the family of a Druid priest performing the burdonsome tasks associated with running a household and a farm. Early in her life she became a Christian. Legend holds that she received baptism from St. Patrick, but this is unlikely. As an adolescent she returned to her father who commanded her to marry. Rather than obeying him, she chose to become a nun receiving the nun’s veil from Bishop Macaile of Westmeath. Afterward, gathering a group of women around her, she founded a nunnery at Kildare (Church of the Oak). Needing to have the sacraments performed, Brigid prevailed upon Conlaed, the leader of a nearby group of anchorites, to receive episcopal consecration and to move with his followers to a site adjacent to the nunnery. This seemingly “mixed house” based upon the Celtic social concept of equality between men and women was unique among Irish religious foundations. Brigid as abbess of Kildare influenced Irish church affairs and headed a network of nunneries as well. Kildare prospered under royal favor in the seventh century becoming one of the most magnificent churches in Ireland during this time. When Brigid died c.525, she was buried alongside Conlaed beneath the altar at Kildare. Three centuries later her body was translated to lie beside the remains of St. Patrick at Downpatrick, one of Ireland's most holy shrines. The shrine was despoiled during the Reformation and its relics dispersed.

Her first biographer Cogitosus writing c.650 attributed to her a number of miracles. Later “lives” added to these miracle stories. Her childhood miracles were associated with the multiplication of food such as providing butter for the poor. As abbess, with the assistance of angels, she caused cows to give milk three times the same day to enable visiting bishops to have enough to drink. Brigid was also credited with taming a wolf at the request of a local chieftain whose pet dog had been killed accidentally by a peasant.

Brigid’s cult spread rapidly throughout Ireland, and as Irish monks wandered throughout England, Wales, and the Continent, they carried Brigid’s cult into those areas as well. In England at least ninenteen churches were dedicated to her, most notably St. Bride's Church on Fleet Street in London. Brigid is still venerated in Alsace, Belgium, and Portugal. Writing in the late twelfth century, Gerald of Wales noted a feature of her cult he witnessed on a visit to Kildare in 1186. There, a sacred fire maintained daily by twenty nuns (nineteen, after Brigid's death) burned continuously. The walls of the firehouse remained on the hill by the abbey church until the eighteenth century. Today, only the foundations remain.

One of Ireland’s most beloved saints, Brigid is known as the “Mary of the Gael.” She is most noted for her compassion to others, especially to victims of violence, the impoverished, and lepers. On one occasion she gave her father’s sword to a leper. Her father, unaware of her act of charity, became enraged and at a loss to control this daughter who gave away his wealth and possessions.

Plaited crosses fashioned from rushes are associated with Brigid. Her iconography depicts her with a cow lying at her feet. Brigid’s feast day is February 1, long held sacred as Imbolg, the Celtic festival of Spring.