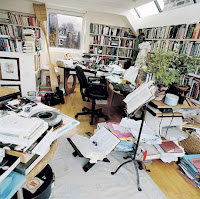 From today's Guardian comes a picture of Marina Warner's writing room:
The higgledy-piggledy does follow a certain order; the stacks and shelves of books have become familiar, extra limbs, and I don't think I'll ever be able to move again and still find what I need. I used to write in a burrow downstairs, and moving up into the roof and light and air lifted me and my writing, or at least it felt so. I think of the room less as a retreat than a crow's nest, because the wind sings around it.The oar in the corner is a work of a few years ago by my son Conrad Shawcross - it was inspired by the prophecy that Odysseus will know the place of his death when he meets a man who mistakes the oar he is carrying for a winnowing fan.

In my own case, finishing an assignment is an occasion to tidy up. Writing one means that everything for that project is out and available for consultation. Something of this is conveyed in this paragraph:

The clothes hanging up on the right come from my mother's. She died earlier this year, and my sister and I have been gradually tidying and sifting: you can see an emerald cocktail dress she pleated by hand, and next to it, two of the outfits she smocked for me. The big W on the hatbox in the foreground comes in the middle of a P&O cabin label, when she was travelling back and forth from Cairo in the 40s and 50s. I am drawing inspiration from these things of hers for the novel I am writing now.

The problem comes when there are several projects going on simultaneously: each then requires a distinct set of accessible references and now and then, the several projects can overlap. A side-effect is an unintended cross-fertilization of ideas. Another feature of my desk is a stack of new books which I am trying to read before they have to be shelved.
at December 13, 2008