P39 to be auctioned Dec 3 at Sotheby's in London 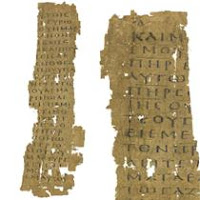 From the Sotheby's catalogue for auction on Dec 3rd in London
(does anyone have 200,000 to 300,000 pounds? And can this kind of manuscript not be auctioned to institutions?):

One of the finest and most celebrated early Christian Gospel fragments, perhaps the oldest or possibly second oldest surviving witness to this part of the text of the Gospel of John, in its original language

Written almost certainly in Alexandria, and used in the important early Christian community at Oxyrhynchus, in the desert west of the Nile about 120 miles from Cairo, partly covered now by the modern village of Behnesa. Ancient Oxyrhynchus was principally discovered Bernard Grenfell (1869-1926) and Arthur Hunt (1871-1934), both of Queen's College, Oxford, who devoted their lives to excavating it. The site furnished many of the finest and most precious records of early Christianity ever found, including the sensational 'Sayings of Jesus' (later known as the 'Gospel of Thomas'), as well as notable classical texts, including Pindar and Menander. The present fragment was recovered by Grenfell and Hunt on 28 September 1922, and it was classified as P. Oxy. 1780. Most of the Oxyrhynchus finds are now in the Ashmolean Museum, Oxford, and the British Museum. Some specimen pieces, however, were transferred by Oxford University to appropriate theological seminaries and colleges elsewhere, including the present piece which had been given by 1924 to the Baptist college, Crozer Theological Seminary, founded near Chester, Pennsylvania, in 1865. It was later the alma mater of Martin Luther King. In 1980 Crozer merged with the ecumenical Colgate Theological Seminary in Rochester, New York. The present manuscript was Inv. 8864 in the Ambrose Swasey Library in the combined Colgate Rochester Crozer Divinity School, until their sale in our New York rooms, 20 June 2003, lot 97, $400,000, bought then by the present owner for what is still by far the highest price ever paid at public sale for any early Christian manuscript. Since 2004 it has toured American museums in the exhibitions Dead Sea Scrolls to the Forbidden Book and Ink and Blood, where it has been seen by hundred of thousands of people.

This is P39 in the standard classification of Greek New Testament papyri. Grenfell and Hunt described the script as "a handsome specimen of the 'biblical' type, large and upright, ... unlikely to be later than the fourth century" (p.7). Roberts & Skeat, Aland, Cavallo, and others moved the dating back to well within the third century, to which it is generally assigned. More recently, Professor Philip Wesley Comfort writes (Encountering the Manuscripts, 2005, p. 172, repeated p. 353): "This manuscript displays the work of a professional scribe who wrote an early form of the Biblical Uncial script ... P39 lines up remarkably well with P. Rylands 16, dated quite confidently to the second / early third century ... and with P. Oxyrhynchus 25, dated early third. I would not hesitate to date P39 as ca. 200".

Such a date, if right, brings the fragment almost as far back as any extant substantial records of Christianity survive. It is less than 170 years from the Crucifixion. In theory, an extremely old person in 200 could as a child have known someone who at the beginning of his or her own long life might have met Jesus himself. Christianity was illegal in the Roman empire, practised in secret and in the catacombs, until the fourth century. When it was excavated at Oxyrhynchus the present fragment was by far the earliest manuscript of any part of Saint John's Gospel then known. Around 1952 the manuscript now Papyrus Bodmer II was discovered in Egypt, P66, also datable to around 200 A.D. overlapping with the text of the present fragment. Papyrus Bodmer III, P75, found at the same time, includes large portions of John's Gospel and is ascribed too to within the third century. Apart from these two, however, no other papyrus or vellum fragment includes any part of John chapter 8, and the next earliest witness to this passage is the Codex Sinaiticus itself, generally assigned to the fourth century. If the date of about 200 A.D. is sustainable, the present piece is one of the two oldest witnesses to the text; if it is cautiously dated to the third century, it is the second or third oldest known manuscript.

The fragment has John 8:14-18 on the recto and John 8:19-22 on the verso, with the account of Jesus preaching in the Temple. The people challenge his right to give evidence on his own behalf, rather than with the testimony of two witnesses, as required by the Jewish law. He replied, " 'I testify on my own behalf, and the Father who sent me testifies on my behalf'. And they said to him, 'Where is your Father?' Jesus answered, 'You know neither me nor my Father. If you knew me, you would know my Father also'" (verses 18-19). It includes the cryptic and prophetical verse 21, "Where I am going you cannot come".

The Gospel text preserved here is extremely pure, graded by Aland as category 1 among New Testament sources, a "strict" text (Text of the N.T., 1989, p.98); "the papyrus evidently agreed with the best manuscripts" (Grenfell and Hunt, 1922, p.8, n.43). The text is consistent word for word with the readings of the fourth-century Codex Vaticanus, probably also from Alexandria. The present fragment is used for its textual value in all modern critical editions of the Greek Gospels, including those of 1951, 1959, 1979 and 2004.

Among excavated fragments, the piece is of substantial size. The script is a superb and spacious Greek uncial, the script especially associated with the earliest Bibles. The writing is as fine as in any early manuscript. "The large and beautiful calligraphy shows that this manuscript was probably produced by a professional scribe for church use" (Comfort and Barrett, 1999, p. 137). The leaf was clearly from a codex, one of the oldest known, and it was evidently paginated (not foliated) by the original scribe, for it has the Greek number "ÏÄ", '74', at the top of the verso, one of the earliest of all books with contemporary pagination. It is not possible to tell whether or not the recto was also paginated, since that side of the piece is missing. Pagination, which is very rare in early codices, suggests that the volume was to be consulted at specific passages rather than read as a consecutive narrative, which is necessarily the case with scrolls. Comfort (2005, pp. 353-4) makes interesting calculations by working backwards from the page number. He notes that the scribe evidently wrote 330 characters on p. 73 and 333 on p. 74. He then counts 23,796 characters from John 8:14 back to John 1:1 at the start of the Gospel. 23,796 divided by 333 is almost exactly 71½ pages. This would not allow enough space for inclusion of the disputed passage of the Woman taken in Adultery (John 7:53-8:11), which cannot have been present. It also shows, more obviously and unambiguously, that this was from a one-volume Gospel of John.

So who is getting rid of it, and why?

Just amazing that something that precious can just be auctioned off to the highest bidder.

apparently it failed to sell but I'm not sure whetehr this is good or bad news - wish I had enough money to give you this as a belated marriage gift - and solve world hunger - unlikely I suppoes given I'not great at making money ...