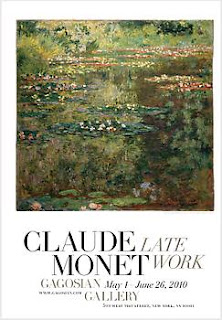 Living in New York City is one of the joys of my life and this week has been exceptional. The Monet exhibit of late works is half a block from our apartment at 522 West 21st Street,
New York, NY 10011--Hours: Mon-Sat 10-6 until June 26th.

From the press release: The exhibition begins with a selection of early Nymphéas that were first shown in 1909 at the Galerie Durand-Ruel to great critical acclaim. From these delicate, poetic paintings follow the more experimental post-1914 paintings, which were never exhibited during the artist's lifetime. Aggressively rendered with broad brushwork and unusual color combinations these late paintings stand in marked contrast to the more refined 1909 works, attesting to the modernity of Monet's expanded vision.
at May 14, 2010

There is a new and wonderful historical novel about Monet that was recently published called Claude and Camille, by Stephanie Cowell--who is a fabulous author and an acquaintance of mine through the Community of the Holy Spirit. Here is a link to her novel: http://www.stephaniecowell.com/claude_and_camille_76602.htm Enjoy!