In between assignments state of mind 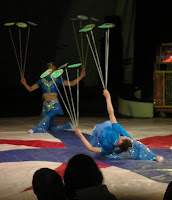 This weekend marks one of those unusual occasions in my professional life when I am in between assignments and thus relatively unencumbered. All this hedging: it is rare enough to be noteworthy.

Done is a rewrite of a chapter that has been hanging over my head for months. Bearing down on me (but being ignored for the moment) are an essay on "The Lost Symbol" by mid-October and missing essays for Daily Episcopalian. On the not-very-distant horizon are book reviews--one for the upcoming November SBL meeting. And the chapter rewrite may receive a favorable assessment. Or it may not. On the far horizon next Spring are adjustments to a manuscript that will be published in the US after its UK publication this month, co-leading a workshop on Jewish and Christian Interpretation of Psalms and Canticles, and completion of committee work for public release. Outside speaking engagements are simply on-going.

It is so wonderful to feel (somewhat) guilt-free that I find myself thinking about trying to finish assignments more quickly. Or not agreeing to them. Truth to tell, being an academic is like spinning plates. When a grant application is submitted or a manuscript is sent off for review, or a contract for a new piece is signed, a plate spins up into the air. The trick is to stagger them so that when one plate is about to crash to the ground (a deadline), another plate is being sent spinning into the air. The problem with spinning plates is that they inevitably stop spinning and that the more you have in the air, the more successful you appear to be. Which means you must keep more and more plates spinning faster and faster. 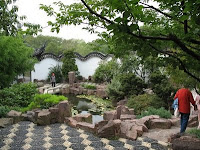 Right now, NOT spinning plates seems like a much more attractive option. After all, there are far more tranquil images of scholars' lives. Here's a local one from the The Chinese Scholar's Garden at Snug Harbor Cultural Center on Staten Island. And being in-between assignments is a much better state of mind in which to enjoy the birthday party of a 7 year old god-child yesterday!
at October 04, 2009

Enjoy it while it lasts!