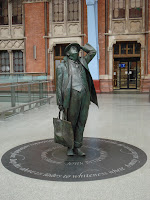 The statue of Sir John Betjeman (taken yesterday) is part of the newly renovated St Pancras Station housing the EuroStar:

It reopens as a hotel in 2009, with its top two floors converted into luxury flats by the Manhattan Loft Co.

Behind it the vast train shed completed in 1868 and designed by the Midland Railway's engineer, William Barlow, has been reglazed and its cast-iron girders repainted a fetching sky blue to house the Eurostar trains.

To the north a new flat glass canopy has been built to cover separate platforms for Midland Mainline domestic services and a planned new high-speed commuter service into Kent.

So glad you've made it there too - wonderful isn't it. But have you drunk a glass in the champagne bar?

Not yet!! The prices were a bit daunting. But we did eat at Carluccio's!

Yes I ate there in December - my advantage is that I come from Geneva so teh prices don't seem so bad!