Queer Bible Commentary and the Gay and Lesbian Bible 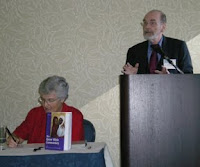 At the recent meeting of the Society of Biblical Literature, I chaired a panel on the recently published Queer Bible Commentary (SCM)--picture courtesy of "Other Sheep."

Participants included contributers and users in equal number all of whom made cogent points about features of the commentary. This collection is a landmark as the first biblical commentary written entirely by GLBTQI people. A new staff member of SCM (UK) was present in the session to describe the enthusiastic response to the publication.

2007 has also seen the publication of the Gay and Lesbian Bible described on their website thus:

Study New Testament for Gay, Lesbian, Bi, and Transgender: With Extensive Notes on Greek Word Meaning and Context is by Classical Greek scholar and lexicographer Dr A. Nyland. There are no theological notes, solely notes of the word meaning and context, taking into account the latest academic scholarship.
Dr Nyland is known as the translator of The Source New Testament ( TSNT ).

This publication is available for download for $18.05 but is more expensive as a book.

According to "The Age (Australia)," a US distributor, God's Word for Women, has "banned this publication and withdrawn another Bible translation published by the same NSW publishing house, Smith and Stirling, for promoting a lifestyle in contradiction of the scriptures.

Two American academics have asked that their endorsements be removed from other works by a classical Greek lexicographer, Ann Nyland, because of her authorship of the gay study Bible".
at November 25, 2007

Just wondering what all your thoughts were on this were, you did not go into very much depth. Sad also, that no one made a post to this yet.

Hope all is well