Visit to the Greek and Roman Galleries at the Met 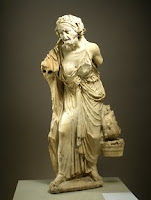 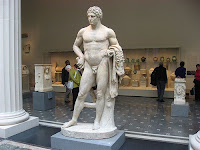 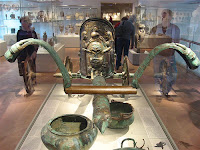 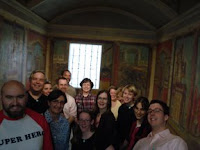 We began with the Etruscan chariot (see picture) in the galleries above the atrium. Then we descended to see the bust of Constantine (below) which is one of the few explicitly Christian items on display. We moved on to the classic image of Herakles (top) in the atrium near the central fountain and thence to contrasting examples of Hellenistic interest in different types of humanity such as older and younger humans (the Old Woman is Roman, Julio Claudian 14-68CE and a copy of a 2nd Century BCE Greek statue, image thanks to the Met). We then crossed the atrium to the two small statues in a corner of the atrium devoted to intellectual pursuits of the Hellenistic age (bust of Herodotus and a seated philosopher). In a reconstructed night room (cubiculum nocturnum) just off the central atrium at the Greek and Roman exhibit yesterday we form a group picture. This room is Roman of the late republic ca. 50-40BCE from the villa of P. Fennius Synistor at Boscoreale, near Pompeii. 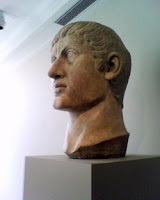 Then we went to the treasury with its spectacular Hellenistic gold armbands of the 2nd Century BCE with triton emblems and the veiled the veiled masked dancer of the same period possibly from Alexandria. We finished with a funerary relief of a reclining married couple of the late Republic.

In the whole exhibit, there is an enormous amount of material that one has to make intentional efforts to comprehend. I tried to move chronologically from the Etruscan through the Hellenistic to the Roman. To do this one has to avoid entering the central hall at the beginning. However since the hall is the natural focus point perhaps the focus shouldn't be chronological. If the Etruscan material is away from the main focus, it is seen as separate from the atrium. All of this indicates challenges the exhibit poses. From the photo however, you see we had a good time.
at May 05, 2007