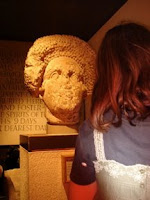 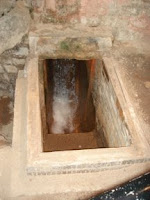 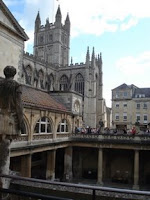 The terrace is where the tour begins. Here's the official website. The Romans built a temple on the site of a sacred spring and dedicated the edifice to the goddess Sulis Minerva.
The conduit system still conveys the water to this day!

Here is a stone head of a Roman matron dating from the first century CE unearthed in found in Walcot, about 2 kilometres (1 1/4 miles) north of the centre of Bath in 1714-15(indicating contrasting ancient and modern styles from the young to the old). Is there any evidence that women actually visited and used the baths in Roman times? Does Martial's epigram apply here?

When I praise your appearance, when I admire your legs and hands,
Galla, you always say “You’ll like me better nude,”
And yet you always avoid going to the bath with me.
Is it that you’re worried you won’t like me nude?

Finally, here is an inscription dedicated to the goddess. At the Bath site, hundreds of tin, pewter and lead curse tablets were found in the spring. Obviously people bathing had their clothes, jewelrey and other items stolen, and sought redress by writing curses on these sheets of metal, rolling them up and tossing them in the spring for the goddess’s attention. For example:

Docilianus…to the most holy goddess Sulis. I curse him who has stolen my hooded cloak, whether man or woman, whether slave or free, that…the goddess Sulis inflict death upon…and not allow him sleep or children now and in the future, until he has brought my hooded cloak to the temple of her divinity.

Words are rarely separated and without punctuation. Letters could be written in mirror-image form or the order of letters in a word, of words in a line, or of lines in a text might be reversed. The writer might also change the direction in which words or letters were written in alternating lines (‘boustrophedon’ ­ a Greek term named after the movement of an ox-team ploughing a field). 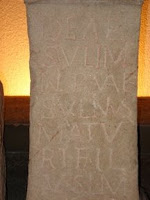