The Gospel according to Judas by Benjamin Iscariot part 2 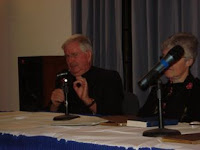 To what genre does this book belong? Historical fiction? Its selectivity is based on what Prof. Francis Moloney deems historically possible as far as Judas is concerned. Such ideas are clarified in the glossary at the back. In the Q&A session, Prof Moloney clarified that the book for him was a repudiation of the work of Dan Brown and Richard Dawkins. "I have written 35 books as a New Testament scholar and if any of them sell 1,000 copies I am happy. But collaborating with Jeffrey Archer offered me a wider platform and I was glad to take it in order to say something plausible and responsible about Judas and his relationship to Jesus."

What Prof. Moloney deems historically implausible are what he calls Jesus' "nature miracles"--walking on water and changing of water into wine. Jesus performed miracles, but "nature miracles" like these were incorporated into biblical material by Christians who understood that that alongside the God of Israel, Jesus was also "Lord of the sea and master of nature." Similarly, Prof. Moloney thinks biblical accounts of Judas' death--that he hanged himself (Matthew 27:3-10) or that his bowels gushed out (Acts 1:18) are attempts by gospel writers to further "blacken Judas' name in the light of Old Testament predictions" but it never happened. As for the 30 pieces of silver, "no serious NT scholar accepts that this ever happened." Glossary note xli explains, "The details come from Zacheriah (sic) 11:12 and 11:13 (see Matt 26:15 and 27:5), and a collection of texts from Jeremiah 18:2 ('the potter's field' see Matt 27:7) and Jeremiah 32: 7-9 (the purchase of a field for pieces of silver, see Matt 27:7-9)." This is a particular kind of NT scholarship. It sifts through NT material to determine by means of certain criteria which materials are historically plausible. These materials then can be used to reconstruct, for example, a life of Jesus, or, in this case, a life of Judas. However, scholars disagree over construction of reliable criteria to sift though materials in the gospels. To see the results of applying different criteria to material from the period of Christian origins for reconstructing the life of Jesus, just look at the contrast between the publications of Luke Timothy Johnson, "The Living Jesus," and John Dominic Crossan's Galilean peasant. And compare both of those to Paula Fredriksen's "Jesus of Nazareth, King of the Jews."

Jeffrey Archer writes a story that has a beginning, a middle and an end using these tools. Mark's chronology is followed and Judas hands Jesus over for his own safety mistakenly trusting a scribe with whom he has negotiated beforehand. Judas retreats to Qumran after Jesus' trial and death where he narrates the gospel to his son Benjamin before being crucified by the Romans.

This book is not only what Prof. Moloney deems possible but what he would like it to be. Jeffrey Archer concurs. Jesus smiles frequently in the book. Confusing ideas in the gospels such as Jesus' use of the term "Son of Man" are (mostly) explained by Judas to the rest of the disciples as allusions to Ezekiel and Daniel "to emphasize the difference between the mortal prophet and God, who always makes allowance for the weakness of human beings" (p.38). A suffering "Son of Man" however is still an enigma to all disciples (and scholars). Judas also mistakenly thinks that Jesus is a Son of David in the sense of being the Davidic Messiah and he hopes that Jesus will enter Jerusalm in triumph to claim the Davidic throne of Israel. The book is sympathetic to such misunderstandings and calls them such.

Such reconstructions lay bare our own prejudices in this case, about Jews and women. Even if Judas lives and dies as a Jew he is locked into the closed religious system of (a reconstructed first century) Judaism. In the world of this gospel, women are the objects of Jesus' healing touch and the occasion for him to publically breach Jewish traditions of purity (p.9). Such reconstructions of first century Judaism are unentable and dangerous, as Ed Sanders, Amy-Jill Levine, and Paula Fredriksen have taught us in their published works.

In red ink for the biblical text, #30 (p.25) declares "Jesus selected twelve men to be by his side..." and the marginal note says, "see Matt 10:1-4; Mark 3:13-19; Luke 6:12-16." But this is a text that doesn't exist! None of these texts identify the 12 as men. The selection of 12 men is how Prof Moloney reads the text. Thus the gospel according to Judas continues on the next page, "As well as these twelve men, Jesus also gathered around him a group of women who had been loyal to him from the beginning of his ministry," and they are Mary Magdalene, Joanna the wife of Chuza, Herod's steward and several others who remain anonymous. Then comes the red text: "They gave of their time and money." Again, this text exists only in the mind of Prof Moloney perhaps as wishful thinking. The marginal note says, "see Luke 8:1-3." Luke 8:1-3 names a third woman, Susanna and concludes, "and many others, who provided for them out of their resources." Luke's identification of three women "and many others" has been reduced to two women "and several others" in The Gospel according to Judas. Moreover, "providing for them out of their resources" is rather more substantial than "gave of their time and money" which is how the Gospel according to Judas renders the service of women. And since the Moloney/Archer gospel does not quote the dialogue between Jesus and the woman at the well in John 4, or the encounter between Jesus and the Syrophoenician woman (Mark 7), the place of women amongst Jesus' followers is severely diminished. I would not be the first to speculate about the consequences of including women disciples as dialogue partners of Jesus and other disciples. Indeed, as a result of Jesus' encounter with the Syrophoenician woman, he changes his mind about ministry. Judas never benefits from such enriching dialogue partners in the Moloney/Archer novel.

In short, while this is unconvincing historical fiction, it is a fascinating reconstruction of how a branch of Roman Catholic scholarship sees Jesus' relationship to Judas. What would other Roman Catholic scholars like Raymond Brown (who had much to say on the subject of Jesus and women in John's gospel) have thought of this project? As for me, I'd prefer the gospel texts in all their richness and confrontive complexity when it comes to Judas. And I'd like to see some responsible historical fiction.
at March 29, 2007

Email ThisBlogThis!Share to TwitterShare to FacebookShare to Pinterest
Labels: Francis Moloney, Jeffrey Archer, Judas Iscariot, The Gospel according to Judas by Benjamin Iscariot

This is fascinating. Thanks!