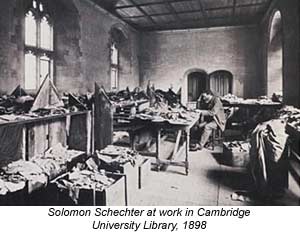 This week's New Republic contains a somewhat breathless article "Getting the Word Out" by Anthony Grafton for the issue dated 1/22.

Having already posted on my visit to the Sackler exhibit in November, I make the following comments on the Grafton piece:

Grafton makes much of the photo of Solomon Schechter with the Cairo Genizah in Cambridge UL and indeed it is given pride of place in the exhibit being the first image that you see:

Bearded and saturnine, the great scholar clutches his forehead as he contemplates one of the thousands of texts that had to be catalogued and identified and reassembled like so many lost mosaics before the Genizah could release its secrets about the history of Judaism and Christianity.

Taken together, photograph and heap embody the scholar's lot--a curse of Tantalus, which condemns its victims to an endless desire for and an impossible pursuit of the whole past, the whole book, the whole truth. Beauty and truth are fragile. Often they survive only as fragments. At the core of this show is a hymn of praise to the slow, grinding work of those forgotten Bartleby-like creatures, the scribes and the scholars, those who first made and those who reassembled the fragments over the millennia, and by doing so preserved and illuminated the textual traditions of the human race.

But alas, the photograph is staged as I pointed out in November. When he worked on the manuscripts, Schechter could only do so in short bursts and then with a mask. Not as photogenic, of course. But it wouldn't be hard to find examples of similar painstaking scholarly work.

What about Hartmut Stegemann's technique for reconstructing the column arrangement of a whole Dead Sea Scroll? Placement of the fragments in order and in the right columns was based on the shapes and damage-patterns of the fragments, and the width of the folds in the manuscripts. Stegemann's method has been verified by independent reconstructions of the Hodayot Scroll (1QHa) by Stegemann and Puech, and cross-verified by the texts of the Cave 4 Hodayot manuscripts.

The range of scholars one meets here is extraordinary: they come from everywhere, from the Latin West to far in the East, and they include women as well as men. The Selden Acts of the Apostles bears what seems to be the scratched signature of Abbess Eadburh of Minster-in-Thanet, a correspondent of Saint Boniface and one of many holy women who copied manuscripts. Most electrifying of all is a fragment of the Aleppo codex of the Hebrew Bible. Known as HaKeter, or "the crown," this manuscript was copied in the tenth century in Tiberias, the citadel of Hebrew grammar, by Solomon ben Buya'a. Aaron ben Moshe ben Asher, the last member of a distinguished family, added the commentary, vowel points, and accent marks. The oldest Hebrew Bible in one volume, this may also have been the first one ever made as a single, coherent book, by a scribe and a scholar working together from start to finish.

He concludes from these observations that no single bible represents the word of God by itself:

Every one of them derives from beautiful but imperfect handwritten books like those displayed here, many of which, perhaps most, omit verses and texts that a modern American would normally expect to find. Only by reading each version--sometimes, each of the many versions of a version--in context can we see what they meant to their creators.

Just to illustrate this point further, the exhibit contains a leaf from Codex Caesariensis (6th C) normally in the Pierpont Morgan Library and Museum here in New York City. On the leaf is the text of Matthew 15:38-17:7 in large silver uncial letters in two columns of 16 lines including the words of Jesus:-

"When it is evening, you say, 'It will be fair weather for the sky is red.' And in the morning, 'It will be stormy today for the sky is red and threatening.'" These verses (16:2-3) are not found in either Codex Vaticanus or Sinaiticus but are in other Byzantine text types like Codex Sinopensis. Are they in your Bible?
at January 15, 2007