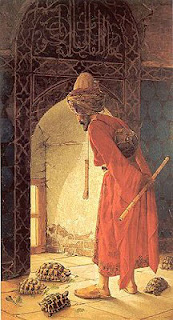 On our recent visit to Istanbul, we were told we must not miss a visit to the Pera Museum in Beyoglu where "The Tortoise Trainer" hangs in the permanent collection. If we want to understand a Turkish mindset, we were told, we had to see this 1906 painting by Osman Hamdi Bey.  So we went and saw it.


The painting was auctioned in 2004 for 3.5 million TL which is the most money ever paid for a Turkish painting.


Osman Hamdi Bey was the son of a Grand Vizier who was born in Istanbul in 1842.  Although he was sent to Paris to study law, he abandoned his studies to follow his talent and passion for the arts at the Paris Academy of Fine Arts. 12 years later he returned to his country as an artist  He also established the first  School of Fine Arts (Guzel Sanatlar Akademisi) in Istanbul and was its director for the first 28 years.
Fusion of cultures and societal advancement were among his passions. The "Turtle Trainer" is one of Osman Hamdi Bey's most original and creative works. It subtly portrays this basic social message:  that change is difficult, requiring much patience, particularly the patience of a sufi dervish.
The five turtles in this portrait symbolize a stubborn, resistant society. The turtle trainer, dressed in a red dervish robe and a turban, holding a ney (sufi flute) is Osman Hamdi, representing a patient intellectual attempting change.  He hopes to achieve this by blowing his ney and occasionally by using it to prod or reprimand the animals.  Unfortunately, the turtles have no ears to hear the ney and with a thick protective shell they are also not bothered by his prodding.
at January 30, 2011