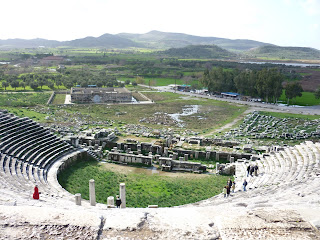 Miletus--site of Paul's farewell speech in Acts 20:17-38--was the first place we visited on our 2010 trip to Turkey. According to Acts, Paul had elders brought from Ephesus to Miletus because he wanted to be in time for Pentecost in Jerusalem. But it is also possible that Paul avoided Ephesus because of his previous visit to that city as a result of which he left in a hurry. Elders in Ephesus might have been grateful to meet Paul at some distance from the city itself.

Professor Beverly Gaventa, in an article on Paul's farewell speech at Miletus in New Testament Studies 50 (2004), notes that it is Luke's last portrait of a believing community. It is the only speech in Acts Paul directs to an audience of disciples. There is nothing in it to do with initiation. Rather, it indicates gatherings of believers in Troas, Miletus and Caesarea interspersed with travel reports to present a portrait of their community life. To be sure, Paul also presents himself as hero in this farewell speech, as a model to be emulated (note the emphatic "I" in vv.23 and 25) but in conformity with God's will. Paul speaks to "overseers" appointed by God's Spirit to serve God's community. 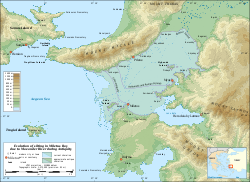 Most helpful in her article is that the address at Miletus represents a division: from henceforth and when he goes to Jerusalem, Paul will be separated from a community of believers. He will be alone. There may not have been a believing community in Jerusalem. But the survival of believing communities does not depend on Paul or any other hero. The message of the speech is adherence to the gospel.