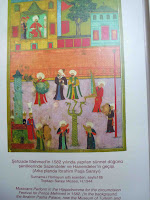 The outline of an enormous hippodrome can still be seen in front of the Blue Mosque today. The stands around the hippodrome held 1,000 people. In the picture below, you can see part of the Hippodrome which was renovated by the Emperor Constantine in 324CE. He also brought items from elsewhere to enhance public appreciation.

The Serpent column as it is now known (see picture I took today from the entrance of the adjacent Turkish and Islamic Arts Museum)  was moved from the Temple of Apollo at Delphi to the Hippodrome. The top was adorned with a golden bowl supported by three serpent heads. The bowl was destroyed or stolen during the Fourth Crusade. The serpent heads were destroyed as late as the end of the 17th Century.


In 390 the Emperor Theodosius brought an obelisk from Egypt to be placed in the Hippodrome and you can see it in the foreground of the Blue Mosque.