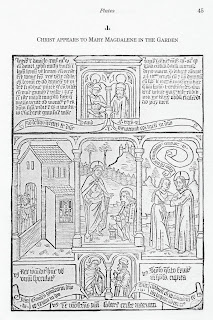 The search for Jesus by Mary exists in the so-called Biblia Pauperum or “Bible of the Poor.” The origins of this book are unknown but by the late middle ages, there are many examples of it. Reflecting a widespread method of interpreting the Bible by means of typology, in the Bible of the Poor persons, objects and episodes from the Old Testament are seen to prefigure aspects of Christ’s ministry. The book is a bookblock with pictures and text produced by impressions from carved wooden blocks. Between 1460-90, the bookblock was a transitional form of publication leading to book printing by moveable type. Whether the book was really designed to educate the poor or whether it was intended to instruct clergy in their preaching is uncertain. However, printing undoubtedly facilitated spread of the book.
Three panels on a single page depict scenes thought to be typologically interrelated. In one example we see Christ appearing to Mary Magdalene in the garden in the central panel. This is an interpretation of John 20. Christ holds a garden implement in a garden setting. In the panel to the left we see the King of Babylon visiting Daniel the morning after Daniel had been cast into the lion’s den. Discovering Daniel to be alive brought the king great joy. The Latin above the panel continues: “Indeed the king prefigures Mary Magdalene when she went to the tomb. After she saw the Lord, she also rejoiced exceedingly because he rose from the dead.”

The central panel shows Jesus and Mary Magdalene encountering each other in the garden of John 20. Jesus is identified by the cruciform nimbus. The same figure occurs in the panel on the right in which the bride of the Song of Songs has wrapped her arms around Jesus while the scroll above her head (medieval equivalent of bubble speak) shows her speaking the words of the bride in Song of Songs 3: “Tenui eum nec dimittam: I held him and I will not let him go.” The inscriptions under the panel, “The beloved bride now enjoys the much sought spouse” and “Showing yourself O Christ you console the holy Mary” indicate that the scene is their encounter in the garden.
at September 25, 2012

This is interesting... I see her statement as one that reassures us that she did not simply stand back and watch her husband be murdered, but healed by her hand.

I believe this story to mean that Mary Magdalene would not simply watch an individual, especially someone she loved so dearly, to be brutally murdered. Her grace was in healing a wound whenever it was necessary and most desired.