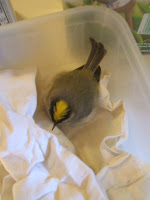 A friend rescued a female golden-crowned kinglet in Chelsea recently. It weighed 5 and half grams. She picked it up from the street as it was in shock. She put into a raspberry box (seen here) with rags and called the vet and then the Animal Medical Center, then the ASPSA. Finally, she ended up finding a federally and state licensed rehabilitator where she took the bird. She called the next day to find out how the bird was. It had probably flown into glass and became injured. The rehabilitator gave it water and half a worm. So far, it is surviving.
at October 08, 2008

She was lucky she HAD a raspberry box! I had to put my ruby-crowned kinglet rescue in my pocket and hold it gently for three long blocks before releasing it into the seminary, where it flew away, after being stunned on the pier! (and I had two dogs with me at the time....)
I'm glad another little friend found a rescuer.

Thank you both for saving the lives of those adorable little birds. Today, in the middle of a blizzard, my husband rescueda Ruby Crowned Kinglet. A tiny bird with a little red patch on his head. We were told by the Aufibon Society to keep him warm and quiet overnight and release him in the morning. Just like the others, he probably flew into a window and have himself a little birdy concussion. A small capful of water and a quiet rest should do him wonders.