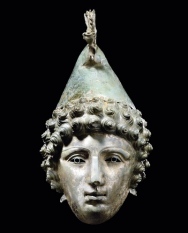 A Roman helmet discovered in Cumbria, UK, complete with face mask has been sold at auction for over two million pounds.

The bronze cavalry parade helmet is described as an exceptional artefact and dates from the late 1st or 2nd Century AD. It is one of only three that have been discovered in Britain complete with face-masks. The others were found in 1796 and 1905. It would have been used for show in a sporting event, rather than as protection in combat. The face has been described as "haunting" and "extraordinary."

Unfortunately the winning bid was anonymous so no one knows if the helmet will leave Cumbria.
at October 07, 2010