Mary Beard assesses the classical legacy of Istanbul on Radio 3's the Essay. She begins with the Egyptian obelisk in the park outside the Blue Mosque as one of a series of extraordinary garden ornaments. The park is actually the site of an ancient hippodrome. The obelisk was originally brought by the Emperor Theodosius to Istanbul from Luxor. There is also an elaborate fountain. 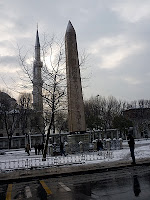 There is also a thin bronze "serpent column" over five metres tall consisting of three intertwined bronze serpents from the sanctuary of Apollo at Delphi commemorating the victory of the battle of Plataea in 479 BCE against the Persians. It was brought by the Emperor Constantine in 324 CE as he developed the city soon to be renamed as Constantinople. All that is left of the column is the base that supported the serpent heads on top of which sat the gold cauldron. 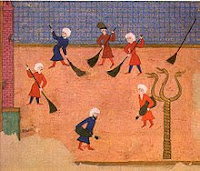 On the right (from the Wikipedia article) is an Ottoman miniature from the Surname-ı Vehbi, showing the Column with the three serpent heads, in a celebration at the Hippodrome in 1582

Such monuments reflect the classical legacy brought to be part of a city called "New Rome" now a city both European and Asian. Their complicated history is part of what Istanbul represents today.

There is a small but vibrant community of Christians in Istanbul. Among other things, the various denominations (Anglican, Roman Catholic, Lutheran) cooperate to run a very important aide program for refugees. They have some amazing stories of hope and compassion despite active government oppression.

istanbul is a lovely city...

Istanbul is a dream city...

Istanbul is a famous city...