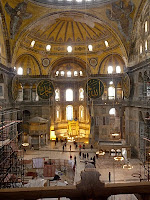 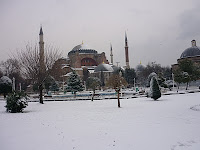 Perhaps the highlight of our trip, the magnificent Hagia Sophia was the focus of our last day in Istanbul. We approached the building through snow. Scaffolding which had been up for 17 years had been recently removed which enabled more of the interior to be seen. So the timing of our visit was fortunate. Above is the interior dome with the arches. To the right you see a revealed face of one of the seraphim just under the dome only uncovered this past year. Our guide observed that he was looking at the face of an angel for the first time. 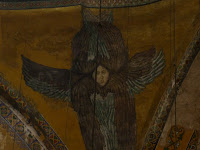 Hagia Sophia began as a Byzantine Church and rebuilt for the third time by the Emperor Justinian in 537. Procopios, a contemporary historian, in De Aedificiis, PG 87 assesses the completed building:

A spherical-shaped dome standing upon this circle makes it exceedingly beautiful; from the lightness of the building, it does not appear to rest upon a solid foundation, but to cover the place beneath as though it were suspended from heaven by the fabled golden chain. All these parts surprisingly joined to one another in the air, suspended one from another, and resting only on that which is next to them, form the work into one admirably harmonious whole, which spectators do not dwell upon for long in the mass, as each individual part attracts the eye to itself. No one ever became weary of this spectacle, but those who are in the church delight in what they see, and, when they leave, magnify it in their talk. Moreover it is impossible accurately to describe the gold, and silver, and gems, presented by the Emperor Justinian, but by the description of one part, I leave the rest to be inferred. That part of the church which is especially sacred, and where the priests alone are allowed to enter, which is called the Sanctuary, contains forty thousand pounds' weight of silver.

After the Turkish conquest of Constantinople in 1453, Hagia Sophia continued as a mosque. The mosaics were painted over in accordance with Islamic prohibition on realistic representation. In 1935 it became a museum which had aided the restoration of certain features particularly the mosaics. 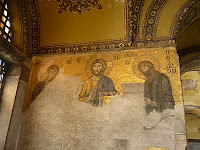 Here we see the Deesis (entreaty) in which the Virgin Mary and John the Baptist petition Christ on behalf of humanity. A helpful website about the Hagia Sophia Deesis is here. It contains details of the creation of the mosaic and its restoration. The bearded head of Christ is thought to be the inspiration of Christ in Russian art while the Deesis itself has influenced western representations of the Last Judgment.
at February 07, 2010