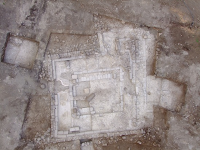 News of a discovery of a first century synagogue at Migdal has been announced. The synagogue has been dated to the years 50 BCE – 100 CE. A rectangular stone bearing the Menorah relief stands inside its central chamber. The chamber is about 120 square meters in size and stone benches line its sides. Mosaics and a fresco have also been found. (Aerial view to the right)

The dig was conducted by Dina Avshalom-Gorni and Arfan Najer of the Antiquities Authority. According to Gorni, the find is “unique and exciting.” "This is the first time that a Menorah decoration is discovered from the days in which the Temple still stood,” she said. “It is the first Menorah that is discovered in a Jewish context, which is dated to Second Temple times – the early Roman period. We can estimate that the inscription that appears on the stone... was made by an artist who saw the seven-branched Menorah in the Temple in Jerusalem. The synagogue joins only six synagogues known in the world from Second Temple times.”

The dig was conducted on land owned by a company which intends to build a hotel on the property.

Ancient Migdal – or Migdala, in Aramaic – was mentioned in Jewish sources and served as one of the central bases for forces under the command of Josephus Flavius (Yosef Ben Matityahu), who commanded the Galilee rebellion but later crossed over to the Roman camp. Resistance at Migdal continued after Tiberias and the rest of the Galilee had surrendered.

Migdal is also mentioned in the Christian “New Testament” as the place where Mary Magdalene, or Mary of Magdala, came from.