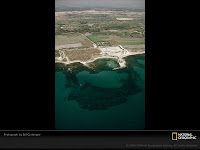 (National Geographic)
Herod the Great's port city of Caesarea was an architectural marvel built to honor Rome's first emperor, Caesar Augustus. The walled city included a palace, a 3,500-seat theater, a hippodrome, and a deepwater harbor sheltered by an enormous concrete breakwater, the outline of which can still be seen beneath the water.
Photograph by Bill Curtsinger.

Rehabilitation of Herod the Great has been underway for the last twenty years. Strabo (Geog. 16.42.6) says of Herod, "he was so superior to his predecessors particularly in intercourse with the Romans and in administration of affairs of the state that he received the title of King." Thorough studies of his building program are available including identification of his tomb.

Peter Richardson explains why Herod the Great should interest readers of the Bible. Herod has shaped the cultural landscape (particularly the urban ones) of Judaism in the first century CE. No one in the ancient world built as much as Herod (with the possible exception of Augustus). In his work we can examine material remains, both architecture and literature as complementary. His pragmatic accommodation to the Romans allows us to see how a Hellenistic Jew survived at this time. While he introduced bathhouses to Israel they included stepping stones which meant the pool functioned as a mikveh.
at April 03, 2009