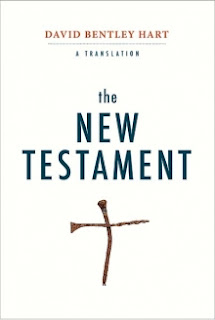 David Bentley Hart's new translation of the New Testament is a breath of fresh air: responsible, creative, and inspiring. Yale University Press is to be commended for encouraging and publishing this excellent new translation. If heeded, it could well influence and improve translations produced in committee work such as the NRSV.


David Bentley Hart is an Eastern Orthodox scholar of religion, and a philosopher, writer, and cultural commentator. He is a fellow at the Notre Dame Institute for Advanced Study and has held positions at the University of Virginia, Duke University, and Providence College.

Why produce a new translation of the New Testament? The author explains: "To be honest, I have come to believe that all the standard English translations render a great many of the concepts and presuppositions upon which the books of the New Testament are built largely impenetrable, and that most of them effectively hide (sometimes forcibly) things of absolutely vital significance for understanding how the texts’ authors thought." Committee work of many modern translations results in imprecision, "anodyne blandness" and accommodation.

The author wanted instead to produce "a version that would be by my lights as scrupulously faithful as I could make it, that would not merely reiterate conventional readings of the text, and that would allow me to call attention to features of the Greek original usually invisible in English versions proved irresistible." In fact, the author's aim is "to help awaken readers to mysteries and uncertainties and surprises in the New Testament documents that often lie wholly hidden from view beneath layers of received hermeneutical and theological tradition. And I would hope my translation would succeed, in many places, in making the familiar strange, novel, and perhaps newly compelling." A more formal translation, the author adheres to the idea that an unsettling reading is the more accurate one.

Whilst we can agree that writers of the New Testament do not write well even within the latitude of Koine (common) Greek of the time, and that the New Testament itself is a strange compilation of disparate and disjointed texts urgently trying to communicate experiences of revelation: what is seen and heard in ways that stretch limits of language, we can also affirm their utter commitment to radical and uncomfortable ideas like the assertion that personal wealth is intrinsically evil.

In my judgment, David Bentley Hart has succeeded admirably. For example, hidden by most modern translations, is the alternation of Matthew, Mark, and John between past and present tenses in narrative and speech. Our translator preserves the strange juxtaposition of both, because "it endows the text with a peculiar vividness; at least, to me there is a strikingly plain plangency to “They crucify him” that is qualitatively different from the effect of “They crucified him.”  Most modern translations eliminate the present tense and substitute the historic present, namely a past tense. As for significant words: Χριστός (Christos) is rendered “Anointed”; διάβολος (diabolos) by “Slanderer”; ἐκκλησία (ekklēsia) “assembly” rather than “church,” "simply to make the reader aware that it was once an ordinary word with an ordinary meaning." Not everyone would agree that "Son of Man" must be capitalised as a "distinctive prophetic title" without discussion, since the Aramaic phrase also describes a human being as the author knows.  On terminology for Jesus, John 1 is especially interesting "In the origin there was the Logos, and the Logos was present with GOD, and the Logos was god; This one was present with GOD in the origin." The choice is explained in "A Concluding Unscientific Postscript." I might quibble with rendering Logos as a masculine pronoun given Tyndale's translation using "it" in vv 3-5, and I think that greater attention to issues of gender and inclusive language would include a wider audience, but see what you think.