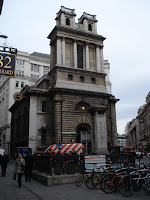 "S. Mary Woolnoth, London, was the least conventional of all Hawksmoor's churches. A basement, with both window and portal designed en niche has banded rustication extending round the two extremely tall Doric columns. Above this a free-standing Corinthian order encircles the belfry and supports twin turrets." 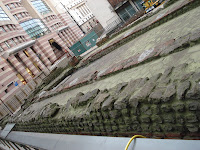 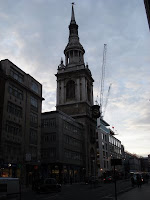 Spent the day walking around City Churches many of which were open. St Mary Le Bow Cheapside (left) was built by Sir Christopher Wren after the Great Fire of 1666. Its steeple is 236' high. The stone arches in the crypt give the church its name. Above is a temple of Mithras uncovered in the 1950's.
at January 15, 2009

It was a marvelous experience! Fortunately most churches were open and in some cases contained musicians rehearsing for midday concerts! I went to one at St Olave with a soprano and piano singing Schumann, Frauenliebe und Leben, Debussy, and Britten songs.